So I’ve hit a wall with my writing- I thought I had finally gotten a good two drafts done, following advice that I’ve seen from episode groups on Instagram in hopes of meeting my goal. I opened up my episode 1 in the middle of the action but I’m keen on building up my Mcs backstory. I tried using a scene where my mc falls asleep and his dream transitions into a memory and I tell the story up until the opening scene (as there’s a lot that needs to happen before that point) - what my problem is that I’m scrapping most of what I had since I couldn’t find a way to write through my issue and continue on.

This is what my story description looks like (UNPUBLISHED) 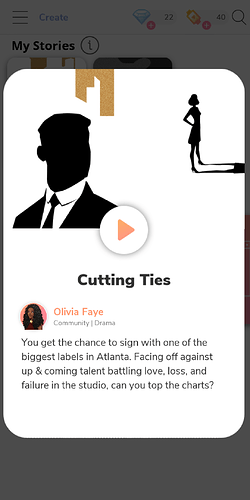 Moved to Share Feedback since you’re looking for story advice and not a writing partner. Make sure to check out our Forum Tutorial for more info about creating topics, and feel free to PM me if you’ve got questions.

While a dream idea for memories is good, it’s used quite often and could be boring.

But how about this?

Does the MC have any “unhealed trauma”? Do they need to still forgive someone for something that happened in high school? Did they grow up with a mother/father that wasn’t there for them?

If so, pay attention!

And if not, then make them have it (lol

To me, a great idea could be having the MC have “unhealed trauma” and make the MC have to see a therapist. The therapist should tell them to start doing a “video diary” where they record themselves for five minutes a day, about whatever!

Have the MC ramble about how excited they are with the studio (or anything, for that matter), and then have them mention something, like, “Oh, so-and-so mentioned a label for Atlanta when we were in high school!” or, “My mother/father always said how proud they would be if we did something big!” and them bOoM! Have the MC remember something sad.

I hope that this could’ve helped you! Let me know if something doesn’t make sense or if it’s golden!

That’s a great idea! Sorry for getting back to you so late, I never got notified… Would you be willing to read the draft I have with my original idea and advise me how to fix it that way?

I would absolutely love to help! Let me know how I can receive this draft, and I look forward to helping you as soon as possible!

Something you’ve probably heard before, but try making a timeline with all the things you want to include in the order you want it to happen, then start connecting lines to how and what needs to happen in order for everything to make sense and seem consistent.

A memory in the form of a dream is a good idea as long as it’s shown and not told. Have the characters play out the memory, the less narrating in this form of recap the better!

When the backstory if the characters play a big role in the story, planning gets more and more crucial, make sure that u plan well ahead and as detailed as possible to avoid possible confusion in the future. Good Luck !!!