Advice on how to write an non-binary character?

So, I’m planning on introducing a non-binary in my story and I got informed on every Web I could find, I just wanted to know if you identify as non-binary or are very familiar with someone who is, what clichés you hate about non-binary character, what things are represented wrongly and what thing should be portrait?
Any advice will be very well received!

@Licorice just remembered that you’re on the forums lol

Hey! I’m honored that you’d mention me.
While I can give some general advice on writing non-binary character, I personally identify as a cis-female, therefore I can’t give you the personal point of view of a non-binary person.

I’ll be directly quoting things from this page:

Understanding Non-Binary People: How to Be Respectful and Supportive

Non-Binary DefinedMost people – including most transgender people – are either male or female. But some people don't neatly fit into the categories of "man" or "woman," or “male” or “female.” For example, some people have a gender that blends...

Thank you so so much!!

Thanks for summoning me lolol

Hi! I identify as non-binary, and I’m happy that you decided to include a representative in your story! Here are just a few things that I think should be considered when portraying an NB character.

This helps sooo much, thanks a lot!!!

Speaking of pronouns, I’ve met multiple enby people at LGBTQ events and they’ve used pronouns like “xe/xer/xers” (pronounce as if it starts with “z”) and “ze/zim/zis” and also “Mx” title as apposed to “Ms” or “Mr”

Yeah, I think the answers above me summed it up well. It’s really just like writing any other character. I suggest researching more about the different types of dysphoria (though not all enby people experiences it), different non-binary gender identities, and common terminology. Also consider the stereotypes! Not all non-binary people are white, young, skinny, afab people.

Oh thank you, didn’t know that

Also don’t mistake non-binary with gender nonconformity! It’s annoying when so many people do it.

Could you explain what’s nonconformity??

Could I ask you a question if you’re comfortable with it??

If I was about to use “they/them” pronouns for my character, should I plural or singular in phrases? Like, if we are talking about one single person using they/them pronouns, should it be like “how are they doing?” or “how is they doing”?
Excuse my ignorance, English it’s not my first language and I’m not familiar with non-binary, I’m trying to learn as much as I can

The singular “they” pronoun still adheres to the grammatical rule, so the former is correct. Here’s a screenshot I took from Merriam-Webster to give a better example: 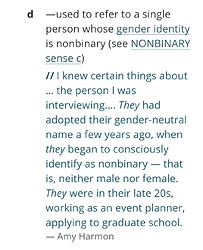