Give your best advice to these new writers that are coming to write their stories. Here’s mine:

- USE EVERY SPACE IN YOUR BACKGROUND! What I mean by this is if you want your story to look more advanced and a little better, use space in the background you have in your story. While using “Susie enters from left to screen center” is easy, it’s lazy and says a lot about your coding skills. I say you only use this for certain circumstances. But in other circumstances, you use specific spot directions. It really makes the story-telling seem more active. It’s a lot of work, but you and your readers will thank you for it

Please be nice to these writers, vets. Remember, you were in their shoes some months/years ago.

New writers, do not feel threatened, hurt, or embarrassed about your questions. We are here to help you, not hurt you. Take the criticism and improve your stories!!!

Thank you and stay safe

How do I make 3-dimensional characters? I try to make my characters amazing but they always end up unrealistic and wooden.

What do you mean? Putting more animations together? Such as using “Idle” to much so you use idle_handsonhip… for one character and different for others?

Are you talking about well-rounded characters? How to make them more unique and personal to your story?

If it’s the latter, then you gotta make them…well…human! Let me give you an example:

Susie is the nerd at her high school. But Susie is also a mean ass bitch, but is sensitive when people are being mean to her. She struggles with authority, which causes her to often refuse to listen to adults or those who are at a higher position than her.

Susie, in this case, isn’t just the “nerd.” She’s a girl that struggles with real life issues and acts in a way that isn’t (in my terms) typical behavior for a “nerd girl.” While you are creating your character, throughout your story, make that character pull at your emotions. Make your character go through complex situations that is at odds with their morals and values.

A good story that does this is He Can’t Tame Me by Meila Summers. The male MC is very complex, in my opinion. He goes through tough situations no child his age should go through. It makes you sympathize with him. He’s the school’s “golden child,” but deals with grown adult shit

How would I input a background from another website such as Episodelife
I would like to insert a bed background but when I copy and paste the name into the script it doesn’t work. How would I upload it to episode for me to be able to use in my story? 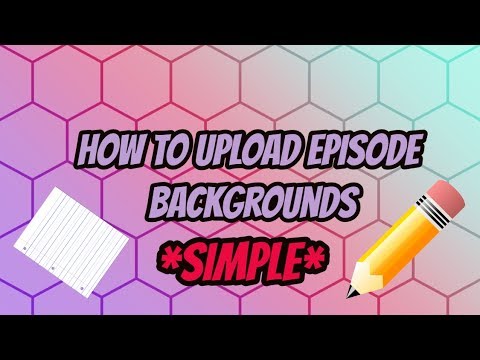 Advice: be original. I completely understand wanting to be a “popular” writer. Who doesn’t? But, when you copy/paste a popular plot and do nothing different from the 1000s of other stories that follow that plot, you run the risk of being lost in their shadows. Cliches and tropes are in every story, but take them in an unexpected direction and make something new and unique.

Put in the work: take the time to learn the coding beyond Suzie enters from left to screen center. Trust me- not only will it make the story better visually but it will keep reader interest. Take the time to spot your speech bubbles & double check that they’re facing the correct characters [readers notice everything].

To go along with ^^: animate& add background characters! It will definitely make your story look more ‘professional’ and advanced even if you are using the minimum spot directing.

AVOID THE RACIALLY/SEXUALITY STEREOTYPED CHARACTERS. I can not stress this enough, new writers! Do not add the sassy, ghetto, black girl best friend, or the feminine and aggressively gay male bff that wants to turn all the straight guys. Its downright offensive to POCs and the LGBT+ communities. Break stereotypes in your story [an example is in my first story I had an educated,independent MC who could handle her own problems without the LI swooping in to save the day [in fact for most of the story she doesnt like him] and had 0 interest in dating her boss. My goal was to create a female MC that wasnt dependent on anyone to solve her problems. Her BFF was a korean/american who was an actress and spoke German and the LI wasnt a mafia member who drinks and shoots people at will. Hes a genuinely good guy who takes care of those around him- even if they dont ask. And hes hella petty at times.] Bottom line, think about who you’re writing and why? The “sassy black friend who speaks slang and makes dumb food jokes” could be a educated, well spoken black woman who encourages the MC to make good decisions and have something to say other than “Guurrrlll, he hot”. The gay male friend could be very masculine in the way he looks and speaks and vice versa - not all lesbians have short hair and ‘manly’ clothing preference.
Just think about why you are writing the character that way-- because using poc and LGBT+ community as the punchline of your story is truly very messed up.

Ask questions: Dont ever be afraid to ask for help, or ask a question you think is dumb. We’ve all been there. But, also, be prepared to learn how to do it on your own, too.

Writing Partnerships: it’s okay to drop out of these if you feel you are being used- it’s a partnership, two people should share the work however you split it.

Take Constructive Criticism: I get it, your story is your baby and everyone should just tell you how pretty and great your baby is… but in reality there are some ugly babies in the world. Will there be genuinely rude af people? Of course and they will say your 'baby’s is ugly and toxic af but not offer any words of encouragement or help- those it’s okay to ignore. But when someone says this is offensive/the directing isnt great but you’re on a good track and you can fix it by _______. Listen and learn from them. They’re trying to help you.

Dont expect to get millions of reads overnight. It doesnt work that way. You have to promote, do read for reads, interact with your readers and have a good, well directed and thought out story. That’s how you get reads. Instagram is an asset if you can make an account for your episode stuff- do and post regularly.

And finally: have more than 3 episodes coded and proofed before you publish- this will give you a little leeway and you wont feel as pressured to rush out content that isnt proofed, checked and that you generally arent very proud of. Plus, it will allow you to be a few episodes ahead and be able to release more consistently on a schedule [anothervway to keep people interest in your story].

This is long and if you have read it all, awesome. Good luck and keep writing!

thank you @Simply.Divine for your kind yours of support to brand-new authors.