So I need the girl to move on layer 6 before she comes to that guy…as you see I put the command
to move to the layer on 3 different places but the only the last one works…but it makes her come on the lower layer and then she “jumps” above him which is stupid…how can I make her to move to layer 6 before or as she walks to him (line 95)!!!

your suggestion didn’t help…she walks fine in both mine and your script but in both, she ended up behind the guy
and than when scripts come to line 97 she moves to the right layer. 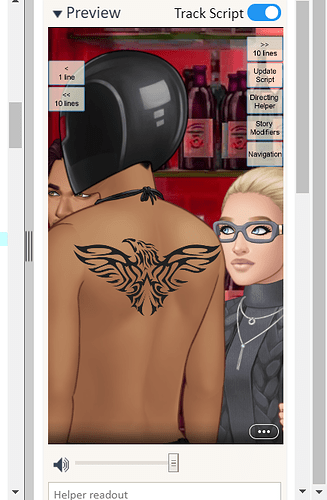 lol of cause there is layer 6 —layers are 100 till -100 besides she moves to the layer 6 just not in the right moment.

he is already on layer 3…The problem is that the script kinda ignores the comand to move HER to the layer 6 till the last comand.

the whole scene is

I have checked it by copy stage…while she is walking she is on level 6.

And then after the comand, she again moves to layer 6.

Any explanation why there is that layer reset?

This is the stage copy in the “wrong” moment…now when I know she keeps layer 2 I can of cause change all other things and shifts them to lower layer to make it work…But I really would like to know why the layers do reset to 2…???

What is wrong with mine layers? Directing Help & Tips

guys non of it works…I found out that the problem is with layer of MELL. Just to bu sure I just before the scene where I start to see the overlay put comand for both characters to move to layer. Its this part: @MELL walks to upscreen right in zone 3 AND MELL is walk_exhausted_loop @MELL faces left sound door_close @CJ stands upscreen left in zone 3 AND CJ faces right @CJ moves to layer 4 @MELL moves to layer 3 @pan to zone 3 sound off MELL (eyeroll_sarcastic) C.J. … BUT when I at th…