Amberose's Live Thoughts on Your Stories

Thank you so much for doing reviews! I’m honestly trying to make my story better, so I would love honest feedback!

Title- Year 2200
Author - Cheryl Anne
Episodes- 5 as of right now. Waiting for my background / overlays to be accepted so I can post the next chapter.
Description - When you keep waking up from the same nightmare every night, and your family has a dark secret, you realize you may not just be 100% human anymore.
Instagram- @deju_designs
Link http://www.episodeinteractive.com/s/5189837778911232

Well, Episode should obviously feature your stories and start sending you money. If they have any questions, I will explain them that they don’t have to wait until you actually unlock the Payments Program, it will happen eventually, we just don’t know when

Is this something new?

Not new, I’ve gotten that a lot

The Best Stories Are Worth Sharing: THE NEW GIRL

So I admit, I did find this a bit confusing to follow at times. In saying that though, I really like the idea you have… I like the shadow/second self concept, but like I mentioned earlier, I’m not sold on showing it by writing their name in the speechbubbles… You mentioned you were new to Episode so that’s why (I hope you don’t mind), I’ve come up with a few suggestions that might help you add something extra that will not only be an alternative for the second self idea, but could also take your story up an extra level.

These are only suggestions, so of course you don’t have to do them, but in case you want to, here’s some guides that might help you learn how to incorporate them: 💭 HOW TO: Spot direct Speech Bubble || Reader Messages / Text Effects Guide Updates || How to "FADE" Characters

Just a last final note, I noticed a couple of times you missed capital letters where there should have been ones, or you added capital letters in the middle of sentences, so make sure to have a quick proof read (or ask someone else on forums if they’ll check for any pesky grammar mistakes - that’s what I do).

Thank you so much for all of your feedback it’s super helpful! I’m already planning to change where the stories end, so I TOTALLY understand what you mean and it’s good for me to hear that from someone else. I think I’ll end the first episode after she meets Gabriel (I’ll learn how to do proper zooms) and have her love interest be introduced. Then I think I’ll have the second episode end where she wakes up in his room. & Then I’m going to include more in the third episode. TBH, I had the episodes ending in different places but then I found out they each had to be a certain amount of lines so I changed where they ended and “TRIED” to make them interesting endings but you’re totally right they’re not as exciting as they need to be at all. I was in a rush to get them published which was kind of silly haha.

I think I’ll take out the profile avatar option and just allow customizing. I could allow the reader to have a custom name, but then I’d have to figure out how to code it properly and what if they give the main character a name that is already used in the story. I’ve totally done that before.

I’m going to take all of your feedback, thank you so so much you’re lovely.

I hope you will continue reading the story sometime when I add more !

Also I came up with the title “Still Silent” because the storyline is going to cover mental illness and a bit of addiction. The main character struggles with social anxiety, and although she will find comfort in drinking and stuff… ultimately without that crutch to “help her” through certain situations she is “still silent” and needs to work on herself and not try to cover it up with alcohol, etc. I hope that makes sense

& thank you again for all of your positive feedback. I’m trying to learn as I go and everyone in the Episode community seems super helpful which is just lovely!

Alright, I took a lot of your advice and updated the first 3 chapters. I feel like they end in much better places. If you decide to replay them (particularly the 3rd chapter as I added quite a bit of new content to it) I hope you enjoy. I will probably slowly go through the chapters and edit more of the technicalities as well… I tried to edit some! Thanks again for your advice lovely!

I think I’ll end the first episode after she meets Gabriel (I’ll learn how to do proper zooms) and have her love interest be introduced.

Then I think I’ll have the second episode end where she wakes up in his room. & Then I’m going to include more in the third episode.

Nice ideas! I think that will work much better. It’s strange you say that they were only ending there because you needed the line limit, because I didn’t find them that short in length at all lol. But I have been there in terms of rushing to publish. I wish for my own first story I had taken the time to learn how to do some more advanced directing (I had no zooms AT ALL haha).

I have also named an MC as a name that was already used too LOL. It gets confusing.

Thanks for explaining the Story Title to me

& thank you again for all of your positive feedback. I’m trying to learn as I go and everyone in the Episode community seems super helpful which is just lovely!

You’re very welcome hun, and that second sentence is totally a fact!

Well I will be contuing with it

I will have to replay episode 3 anyway because I’ll be forced to since you edited, lol. So just wondering have you added much to episode 1 & 2 meaning that I should reread the whole thing or is it just episode 3 that’s had a lot of extra stuff added?

I didn’t really add much else to episodes 1 & 2, nothing that you hadn’t already read (it was moreso some of the technicalities that you mentioned).

I ended episode 2 with him saying “Good morning, sunshine!” to her waking up in his bed.

Episode 3 is where there is a fair bit of new content and I think the ending is a bit more “exciting” as well.

Ok, sounds good. I think I’ll just reread episode 3 then because, you know how it is with passes, lol. Look forward to seeing what you come up with

Good call starting on episode three when you decide to continue the story. Tysm! Which of your stories should I check out first?

Aw you’re so sweet. You don’t have to feel obligated to read my own stories though lol. But personally I think One of the Girls is my best one hehe

I’m super new to the forums as well as writing/creating for Episode, but I’d love to get a review. I’m not ready to publish my story yet (mainly because I only have 3 fully edited chapters). Would it be possible to share it with you without publishing?

Yeah, absolutely. You can either share your link here or pm it to me if you don’t want others to be able to click on it

Also, welcome to the forums, enjoy your stay

I don’t feel obligated at all

Will check it out. Thanks!

Thank you so much!! I will definitely take your feedback on board

Thank you for taking the time to do this feedback, it must have took a long time. I really appreciate it!

I will have to use the colours to distinguish between the shadow self and the character, I didn’t know you could do that

There’s only 4 live episodes but 5 will be posted some time tomorrow!

The Best Stories Are Worth Sharing: Mischief Night

This Story follows Brooklyn, a girl who hates Halloween but soon finds herself in a world with Real Monsters! 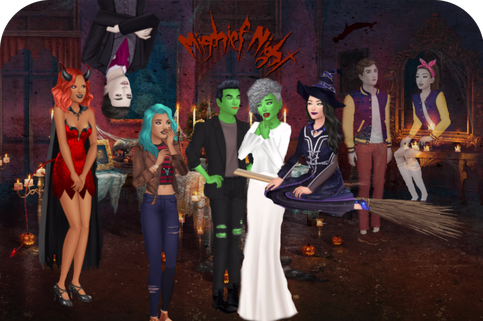