So, when I’m trying to rotate this overlay, to make it look like someone is throwing something, the anchor point is wrong. I have been trying to fix it, but, the overlay still looks weird when it rotates. (I have tried lots of different anchor points.)

This is the overlay I’m using:

Tags: (Sorry if you don’t want to be tagged.)

The transparent space around the arm is kinda big. It might be easier to crop it so that the elbow is near the left edge.

If I remember right hight is the second number no?

So it would be more

Okay, so, I cropped the image as you said. Now it looks like this:

However, I am still having some issues with rotating it. Every time I rotate it, it moves weirdly. (I’m trying to make it so that it looks like she is throwing the alarm clock.)

Oh, that jumping issue, I had that in my story, and I never fixed it 'cause the overlay was rejected anyway.

It’s not the size, shape, or anchor point that’s the issue with that one, I had the same issue with a roughly square overlay.

I never figured out how to fix that, my only guess was to “fix” the shift in the same line that it rotates

That or ask Dara.

I know this doesn’t answer your question, but could you just use the pass_football_serious animation instead?
I guess it’s overhand so might not work if you want underhand… but

the problem is that you change the anchor poin after you move the hand.

When you will rotate overlay ALWAIS change the anchor point before you move it.

To understand why:
Anchor point is a point ON overlay so basicly its a way you say to script…please hold my overlay in by the top left corner…atc

So the moment you change overlay anchor point it changes position on screen even you havent shift command there.

and after this move the hand and use the rotation in time.

When you do it like this you will see that Your starting possition will be on different spot than you have it now.

what you sugest will not help as explained above. 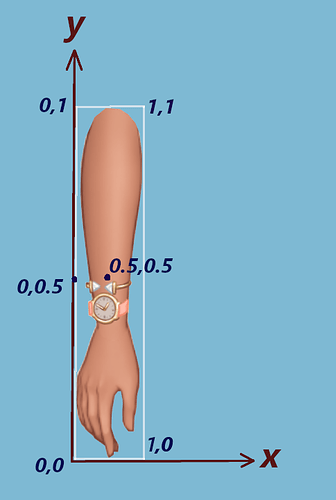