Also in the other feedback thread, when someone asked if the new animations will come back, Tory said:

“We will still need to do a tech update to animations at a later date, so they will likely make their way back but in a different form.”

So it’s already confirmed that an animation update will happen, but we also know now that it won’t be the same as last time. It’ll probably focus on other parts.

That being said, we really don’t know what Tory meant by “different form” but since the announcement for rolling back the update said that the update in its “current form” had removed a lot of the subtlety that the community was used to, then that probably means that they’ll make sure the revised update doesn’t remove the subtlety.

Support! Phone conversations feel very bland at times, since there’s not that many animations to work with. I want to see characters laugh, cry, walking, running, and more on the phone. I also agree with your second suggestion! Animals still feel out-of-place currently, and more animations would really help! : )

I noticed some glitchy or weird bugs, like the horse riding animations. For example, my character’s leg seems skinnier than the other, and the shoe overlays the foot. I don’t know if that’s something done on purpose, as that character’s leg won’t be seen once the complete mechanism of the animation is put together, but that’s something I noticed. Another thing with the sitting animations is the leg tends to slowly glide upward as the character’s upper body moves like it has a mind of its own. It looks freaky. There are also some talking animations where my character’s lips don’t fully cover the mouth like there’s a tiny bit of black space between the lips and the face. These are some of the more minor glitches and oddities in the animations I found.

Which animations specifically cause that black space glitch? Tory might ask that if she sees your comment so specify what they are. Also what lip shape does your character use?

Also I think for the horse one it is purposefully animated like that so it looks good when you have the character riding a horse.

If you place your character on a horse, then you’ll see it look more realistic as the “skinny leg” will not be there.

Oh goodness! The leg is definitely glitching in the screenshot. O.o

I agree about the issue with mouths not closing properly. You can see the white of the teeth, which is likely not intended and it’s kind of distracting.

Hopefully they can fix this but at the same time we definitely don’t want any major changes to our characters. As you saw, the update clearly looked terrible hahaha. But also the update didn’t even make the mouths move properly. Just made them look hideous. Especially medium straight natural lips!

Since majority of the community doesn’t want the characters to be changed in terms of looks, hopefully the new update will update animations differently since Tory did say that they would come back in a different form.

To be honest, not really. I did like the angry animations but if they can be fixed to look like the style of how the old animations looked that would be nice. For the most part, the animations are already fine as it is and I didn’t like how the new animations took over the old ones. Especially when they added those creases and changed the way that the lips moved.

Let us keep the animations as they are. Is there anyway to update them without really changing how we’ve seen Limelight?

I did like some of them such as idle_armscrossed_angry_loop but can it be a separate animation and can the lips and face remain unchanged?

@aromaticcerise i hope they can fix the mouth one without changing the way they move. Hopefully they can just make the mouth close

The animation I noticed the tiny space was this one. I can’t think of the other talking animation, but my character has Full Heart Pouty lips and it’s mainly been with this animation that the space can be seen. 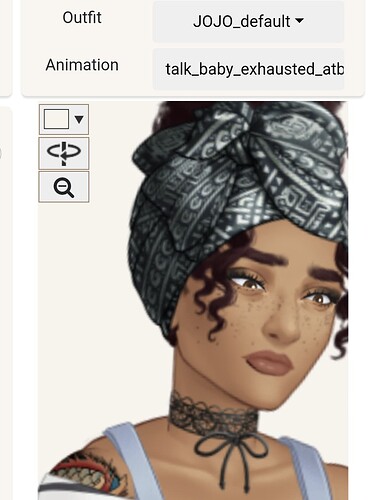 Ahhh okay. I see. I think You should send a support ticket. This is a common glitch with this particular lip shape.

How do we use this update? It automatically updated my stories to thoose animations b4 but i guess its been changed?

Yeah, the new animations are no longer on the portal, so we have the old animations back, just refresh your browser or update the story, when I say update u don’t have to add a new chapter/episode, just have the 3 chapters that u already have in your story and click on the update button.

@Tory As I didn’t have a chance to see the animations for myself, I’m kind of sad it got rolled back! I think this new animation concept would be better if you gave tiers to the emotions so to speak. Rather than change an animation to be one specific emotion, you could have a down arrow that lets us choose from emotions like: Original (og look of the original animation designed), Neutral, Happy, Sad, Angry, Surprised, Confused, etc. That kind of concept would probably go a lot farther, and you could make less duplicate animations! I really hope you guys would consider this, I’ve always loved Episode, and would like to hear feedback! Going to go check out the new clothes as it’s been a while since I’ve checked out the Clothing Catalog!

Hi @jill_epi This does sound like a good idea!

But the problem with the new animations was that it took away a lot of the subtlety that we were used to. It really changed the lips and how they moved. Especially medium straight natural lips for men.

We basically want an update but with little to no changes to the face. Especially the lips.

While we should push to keep the original charm of the animations, the dev team can’t make everyone happy. They’re updating how they make the animations, not just the animations themselves; only so much can be left to be. Some changes are inevitable, and it’s not exactly fair to ask for so much. (Not that you shouldn’t ask for anything, just be mindful, since not everything is possible.)

I also want to counter your arguement- subtlety is nice, but we could do with more expressiveness. Subtlety is great until everything feels static, which, imo, is happening with the animations.

I feel like Episode could lean in a bit more into the cartoony aspects of the artstyles. INK was really popular, and is still used despite LL being the most recent style, because it didn’t take itself too seriously. : )

But also this particular update really upset everyone.

I think there should be more expression but it should be separate from the animations we have.

Like there should be more expressive animations, but they shouldn’t replace the ones we already have.

They shouldn’t change the look that we were used to. Like the lips and other parts of the face shouldn’t move differently.

Tory also said that the animations will come back but in a different form since the current form removed a lot of the stuff that we were used to.

But I also agree with your point. Some of the animations do feel static at times.

Yeah I agree. There should be more expressive animations but they shouldn’t replace the ones we have.

Also the faces shouldn’t move differently like they did with the initial update. The lips particularly moved like fish lips almost and it really warped how I viewed a lot of characters. The facial features should remain and move as they are.

But I do think we need more emotions shown in addition to the ones we have.

Keeping the original mouth animations, while less efficient, would be more realistic and would keep our visions alive.

only so much can be left to be.

Hopefully they can change it without it looking like how it looked initially. I definitely don’t want to see Limelight looking like that again. If that makes sense.