Hoping today is the day! Sadly, I’m being pessimistic…

We still have 3 more hours

Exits page for another hour

does anyone still think we have a chance of getting the new contest today?

I think every time y’all bring up the next contest Episode is pushing the date back.

I doubt it. When I looked up the times the last 9 contests were posted, only one of them was after 3PM EST, and that was in 2020

Do they ever skip months? I mean it’s the 18th. I feel like if there was going to be a contest it would have happened already…

As far as i know they almost always announce the new contest like 3 days after the deadline or a week max. This time they are taking too much time

They were still on their winter vacation/break until last Monday and this Monday was a holiday in the States. It’s not really a day thing since the contests usually last 8 weeks, so they’re usually announced on random days (not like the first of the month). Last year’s R&R contest was announced on January 19th. And they usually announce a new contest within a week of the previous one ending.

Hello Episode Authors, We know you’ve been anxiously waiting since the start of the year for us to announce another Writer’s Contest. Well, now the time has come time to start the next Writer’s Contest! The theme is…Heroic! [Heroic Contest] You must journey to find out who you truly are. Whether that journey is one of self-discovery, to save your kingdom/home/world, or to find your way back home, you need every ounce of strength and determination to reach the end. Contest Intro To celebr… 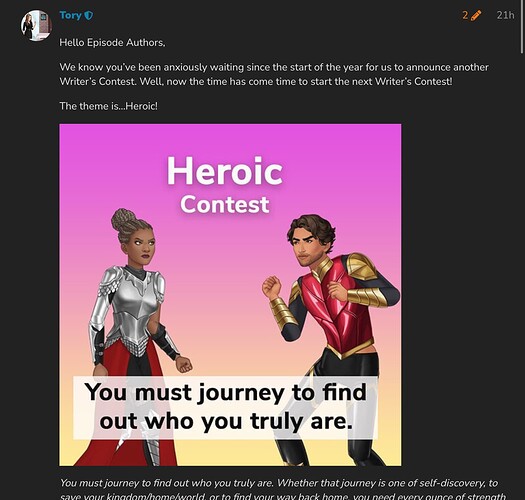 I wouldn’t trust the times posted. This thread was posted around 6pm EST but was shown to have been up a few hours before that and the one announced today shows it was posted yesterday.

I wouldn’t trust the times posted.

It’s usually b/c I sometimes will build them ahead of time.

Oh no worries! Wasn’t accusing you guys of anything.