I am coding one of my scripts currently, trying to place one of my character in a specific spot but every time i try save/preview it, it moves to it previous spot.
This is my current script, with one of my placement:
@MINION14 spot 0.101 97 468 in zone 1
@MINION14 faces right
@MINION14 moves to layer 4
But every-time I save/preview, the character position changes back to:
@MINION14 spot 0.083 66 473 in zone 1
@MINION14 moves to layer 4
It’s not following my coding at all. If any can explain why, please give me some insight.

I’m not sure what you mean, or why this might be happening.

Is the code in your script changing back each time you refresh, or the character’s place in the preview pane?

All I can suggest from this much info is the standard weird-bug-checklist:

It may be too many characters in one scene, but my script isn’t changing. My coding is the same, just not showing on my preview.
My coding script, with my desire character placement i want: 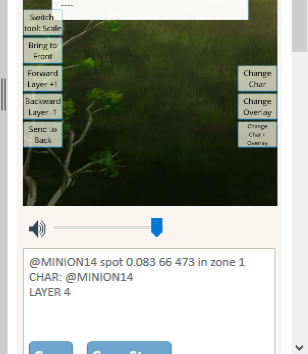 …I found the issues

. I feel so ridiculous, you were right with the typo, but it’s resolved, thank you so much for responding and helping with my issue!!