Any Artists want to help make an Art scene?

I’m planning to have a horror scene. The lad has turned into his final form an Demon Angel. He’s destroyed Califonia, killed a bunch of people.

His eyes are basically fully black, red centres and he’s got scratches on his stomach with blood over both his hands.

He’s lost complete control of himself. Do it in whatever style suits you best.

I recommend putting you’re watermark on it so no one can steal your beautiful work. I’d give you the shoutout when using it. 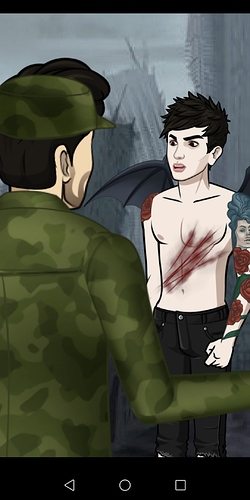 Before getting this made, just a little something to bare in mind, beware how much blood you ask to be put on this art scene, as episode won’t approve it if there is too much. They are quite strict with this rule and I have seen several art scenes that don’t use much blood be rejected and having to be remade again with even less.

[41] Hello and welcome to the official art request thread of our new aspiring art group, Epi.Angels! Also please leave picture reference in the thread if necessary. A special thanks to @rubywrites who made all the banners on this page [17] CREDIT You must give credit as a lot of time and effort are takken into making the perfect pieces. NO THREADHOPPINGPlease do not request the same thing elsewhere, or we will not accept any other requests from you. GIVE US TIME Art takes time and you need…

Well baring in mind he’s punched few people, has a scarred lip with a bit of blood and has scratches on his stomach I wouldn’t say so much blood is needed for this scene.

I was just referring to the blood on both hands part, the way it was phrased. Just made a suggestion to bare in mind so you didn’t wait for approval for weeks only for it to be rejected.

True, that’s understandable I don’t think he’d have a lot on his hands.