I haven’t been on recently so I decided to share some concept art and story beats I’ve created for my story (The Wolves Among Us). 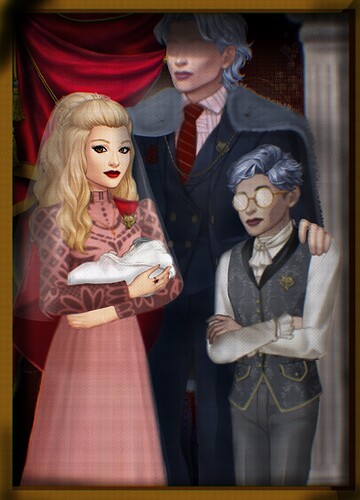 The Family
The main figure standing in the back of the painting is Grayson Grey, most signified by his family crest and trademark silver hair, an unusual distinctive genetic trait that most members of his family bare. To his left stands his son and heir to his company. Not much is known about his son other than his odd skin discoloration and slough of health issues. For this reason he barely leaves the estate unaccompanied. To his right his wife, and their newborn daughter Ivy, a healthy baby girl of only two months. After Grayson’s sudden death the estate was inherited by his son which was then passed over to his widow. Of which she still remains matriarch of to this day. Not much is known about what happened to the Grey family after Grayson’s death, only that the company continues to thrive.