This is the scene and for some reason, after all the @BRENTON spot he jumps out of the scene. I don’t understand why

&BRENTON spot 0.840 -47 333 AND BRENTON faces right AND BRENTON is sleep_lay_uncomfortable_loop

Realised I forgot some of the scene.

this part causing him to jump out?

@lanafrazer_episode yes
I had to make him face left before

Because for some reason the other lay animations are different with the way the characters face they face.

@BRENTON spot 0.840 -47 333 in zone 3 AND BRENTON faces right AND BRENTON is idle_lay_groggy_eyesclosed_loop

So, when BRENTON faces left, it’s like he was off the scene?

No when the scene starts I had him facing right and then when I changed animations for him laying I never changed the way he was facing so I didn’t understand why he was jumping off-screen but for some reason someone on Instagram told me that some of the laying animations you have to change the way they are facing so that they don’t do that.

yeah its layering and facing. Hm. send a screenshot.

I got him know I added it in and its working know. But I can still show you if you want.

some lay animation when you have char facing left have head on left side while some other have it oposit…simply it this occure you have to change the facing to the other side. 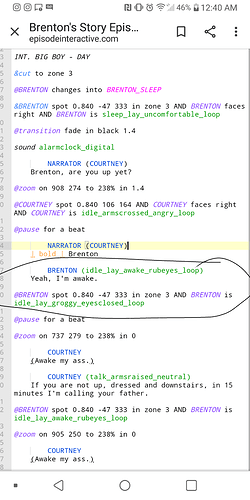 Where it’s circled is where the issue was all I did was right before he talked. I added @ Brenten faces left

Eyah I also do not understand why is it so.