Can it be my story got reported?

My story is showing N/A under genre and overall rank. Some on the forums have said it happened with them when the story was under review. While I would love to think that my story is finally getting reviewed [cuz it did rank 102 or so twice in genre] but could it also be a case that my story got reported??

It happened to my story as well a while ago
It meant. My story got reported bcz of some words like *ss and f**k.
I submitted a support ticket and they told me what was the problem and told the exact line in my portal where I used thise words.

I think you should do the same.

Plus, I think We get a mail that our story is being review not get that NA in our genre or ranking.

(Thats what I think)

I have not used even a single word like that : ) I am very sure- not even anything close to that. But I’ll still submit a ticket ig

Many said they don’t send a mail unless the review is done, i.e., we don’t get a mail when it is under review still.

Thank you for the reply.

Okay so, ya- my story got reported because of teeny-meeny amount of blood

but it has got reviewed now

after I made the changes. 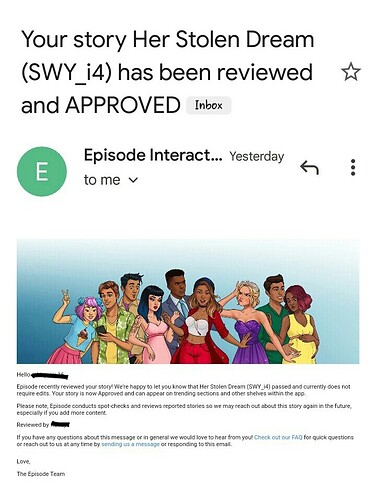 It most likely didn’t get reported. No one is that sensitive. You probably hit the 100 rank which automatically gets your story put into review

When I submitted the ticket, they replied that the tank is NA because it is blocked due to violence of rules and gave me the exact line numbers. I corrected them and it was done.