Can Someone Help Me Write My Story: "Starting Over"?

What is it about?

The MC has a miserable life, and tries to commit suicide, but when she survives she has the doctor pretend she died. The rest of it is going to be about her life after that.

Can I make a suggestion?

Isn’t this against guidelines, I mean it won’t be as long as you don’t show her doing it.

I’ve had it out for a while. And it hasn’t gotten removed.

I get the feeling your story is more about the MC “starting over” and not about her being suicidal. Since the topic is very triggering for people, why not make it something less confronting? What if MC just gets hit by a car and then when she wakes up in hospital, she realises she can use it as a way to start a new life. I mean, the reality is that if you make a suicide attempt, depending on your age, they’d probably keep you as an impatient, send you to some therapy sessions, put you on anti-depressants and monitor you

And what would I even name it if I did that?

Whatever you want to name it. I don’t think the title is too much of an issue to change tbh

I agree. Suicide is a VERY triggering topic and since it is about starting over, and not focusing on the suicide attempt as much, then maybe make a story about something that could happen to anyone at anytime.

Or the least you could do is change the title, since you can’t have a warning for that.

What could I even change it to?? It’s the only thing I could think of at the time.

I’m not sure. It’s just a suggestion since it’s a very triggering name. 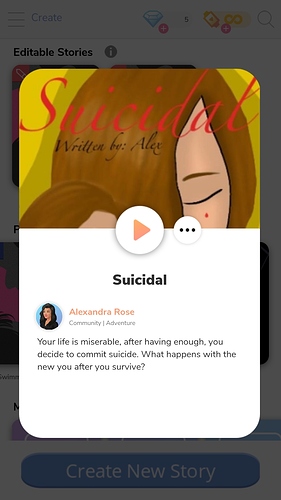 As a few people have mentioned earlier, the title is very triggering. I know this means you will have to change your cover and title, but I think you maybe should have thought about this before getting the cover done. But please do change your title, it’s getting me very… triggered.

A friend made it for me when I told her about the story.

If you’d like I could make a new one for you. That is, if you are going to change the story.

The story? Or the title?