Can someone please help me solve this coding error? [SOLVED]

I don’t understand what this means but I’m hoping that someone here on the forums does. All help is appreciated

. I’ll add a photo of what my script looks like.

And as @evelyn.woods said on line 497, there’s an extra ) after the animation

Thank you both so much for the help. Can you tell I haven’t slept in a while?

Unfortunately for me, that wasn’t the problem. I still have the error 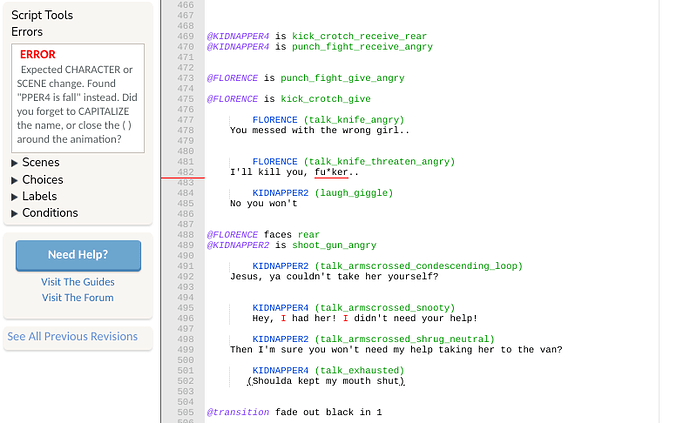 Line 488 you put @/FLORENCE faces rear and is @/FLORENCE is rear or faces right whatever you want to put.

I clicked on the error and it took me here:

I want her to face rear.

Here are screenshots of the whole scene from beginning to end: 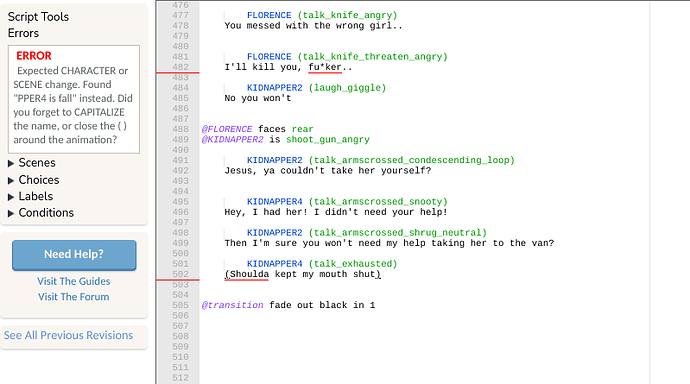 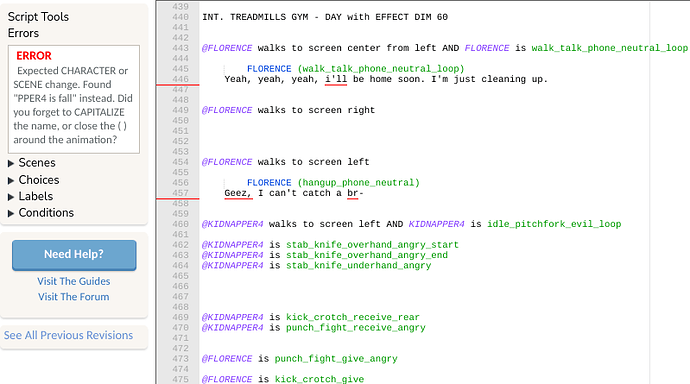 Where else you’ve added the Kidnapper4 in the script?

Hmm I’m not seeing any errors, it could be something more above in your script.

The error is saying you have entered the character name PPER4 into your script. Is it suppose to be KIDNAPPER4 instead of PPER4? Find where you entered in that name and fix the name.

I’ve only used the character in the one scene

Thank you for the advice, I did this too but it only says “PPER4” when I have “KIDNAPPER4” in my script.

It says PPER4 in the error because you have that name somewhere in your script. You must have accidentally wrote PPER4 instead of KIDNAPPER4. Otherwise you wouldn’t be getting that error.

Send the scene in one single screenshot

Show the part that says

PPER4 is FALL (the one from the error)

Okay so I somehow fixed the error. I exited out of the tab and disconnected my computer from my wifi and it worked? I don’t know how but it did. Thank you so much to everyone who tried to help me solve my problem, I appreciate it. <3