Can someone read and give feedback on my story?

I’ve published my story a few months ago, yet I’m having a hard time gaining reads. Can someone please view my story and check what’s wrong with it? I studied hard to code and put a lot of effort in writing a good storyline, so I’m slightly bothered if whether my story is worth continuing.

I am hoping you guys would read my story. Here are the details.

Description:
Jason caught himself in a CRAZY, complicated situation. Watch out on how he will handle his true feelings for Alli. Will he be able to admit he’s falling for her after finding out she’s his puppy?? 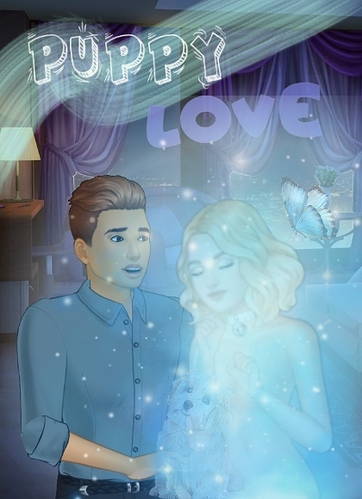 Why should you give this story a read?
Well I know it’s title appears to be so cliche but don’t be fooled 'cause it’s beyond what you expected. Find out what it feels like to be in a dog’s feet by reading Alli’s thoughts. Will Jason be able to admit his true feelings for Alli after finding out she’s his puppy?

I will help! I’ll read it now because I’m bored then give my review soon!

thank you, thank you!

First Impressions
I like the cover, it’s kind of like an eye catcher, having an interesting cover helps make your story look more professional. The description is good too, not much I have to say about it, it gives a clear statement about what the story is about without giving too much detail.

Episode 1
AH! The splash is so cute!
Glad that you made choices matter, readers want to interact with the stories and they also like to know when their opinions matter.
I love the intros in general they’re so cute!
I like the use of the puppy overlay. I don’t know to me using things like that makes you seem like a very good director.
Like the slight comedy element, I personally like comedic stories, so I like that.
Love that he is ranting at the dog!
THE PUPPY IS SO CUTE!
okay I need to stop and start being professional.
There’s a slight error, a character said something along the lines of “Why did she asked to meet up if she doesn’t pay attention” something along those lines I have a bad memory, but you would want to say “Why did she ASK blah blah blah” I’m sorry if I came off rude, just letting you know because I want you to be the best author you can be.
In the one scene, The one girl is walking as like a background character, but she’s like… floating? So you might want to fix that a little bit so she’s on the ground.

On another note, I do like your use of background characters, it makes the story and directing more professional.

I also like your use of sounds, as I said before, it just makes the story more professional.

Ah, I feel bad, but to me the plot is a little unclear as it is called Puppy Love, and obviously from the intro the puppy turns into a girl, but then there’s Gianna and Mike, in my opinion there’s no real reason to have the whole story plot of them there as this story should focus on the whole puppy turns into a human plot. I don’t know, Like Gianna and Mike should still be characters, but I don’t think their story line should be completely told as this IS supposed to be a story about Jason and Allie. I also found in between the story quite boring, I like to get into a story right away not have to read about how they met at a coffee shop and that’s when Mike and Gianna’s story lines were introduced, I just find no point in that. You have a reaaalllyy good plot, I just think you got sidetracked.

Thanks a lot! Now I see where I need to improve. I guess I should really focus on Alli and Jason and avoid turning my story on Gianna and Mike. Thanks for noticing. I appreciate it so much!