Hi, so in my story I’m trying to allow my readers to change their hair and makeup after choosing their outfit before an event or something. So I used the character customization template and erased it all to leave the hair and makeup part. It was working fine but now errors like “expected character or scene” or “unexpected character or scene” keep appearing on the line where I’ve written the choice. And it wont let me preview my story until it’s fixed. I will add a ss of my script so you get what I mean 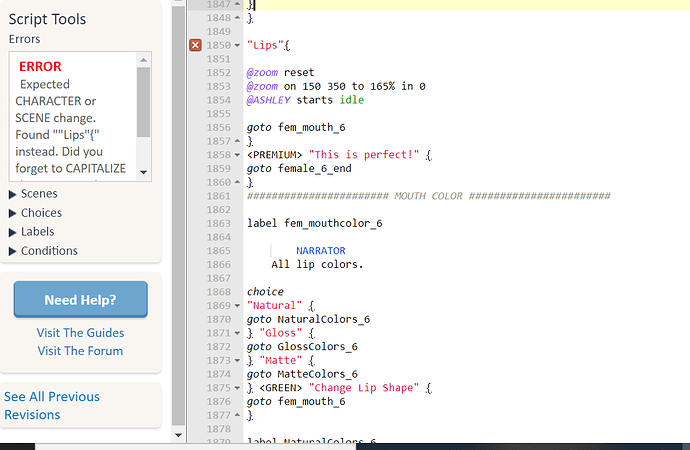 Do you have a label before it? That might be why it isn’t working. And also, you should use a hair and lip template instead of an entire cc one.

Maybe it’s because line 1848 is closed off (the arrow next to it is pointing up). If that’s the start of another choice category add choice on top of it.

Check out Dara Amarie's Hair and Lipstick customization templates for both Limelight and INK.

Maybe instead of erasing you should use a template.

For future references, the error was caused because of the extra space on line 1849. The reason this error that you’ve just experienced exists is because choices with only one option is a real thing. Because of this, the extra space tells your script that you’ve only got one choice, and tells it to go on to the next scene or line of dialogue