What are your opinions on these characters?

Context/Reason: I tend to have Same Face Syndrome

1: I assume she is very light skin black, personally I would give her a darker skin tone. because her face and hair is very heavy on the black feature. but her skin color shows she is mostly European in her DNA. not the best to say it but I dont know how to explain it better
2: no opinion really , kinda a bit like above though
3: no opinion really. red with green eyes, is a bit clichi though
4:again same you make very light black people. also nothing wrong with doing it at all, and I am sorry if it seem like I do have a problem with it.
5: no opinion
6: personally dont like the hair
7: would pick some diffrent lips. smaller once.

all your characters look good, and beautiful. what I mention is just my opinions,

additional note, yeah I can see that

I tend to have Same Face Syndrome

you reuse eyebrows lips noses a lot. maybe try and spread out and dont keep to the same, there are like 20 to pick from no need to use 2 on 6 people, personally I follow rule of not using the same features on the main cast twice unleash family.

much better, the lip color is better too, though I just thought she was quirky with the purple lipstick

but you change her eyebrows to the same as these. like I said avoid re using the same features on the main cast

I recommend a darker lip colour for her., it should match her skin tone, though I liked the one she had already, I think she was the one who least needed it darker.

also still using the same eye brows. you have five characters who has those, I really recommend you try others. it might be your favorite but its not the only one, and the others can be pretty to if you try to use them

also just for perspective, because sometimes it can help, I color coded all the times you re used features. same colour is the same feature.

visuals often help me better to understand, than just being told so I thought to do that and it might help put in perspective, also color on chin is the face. 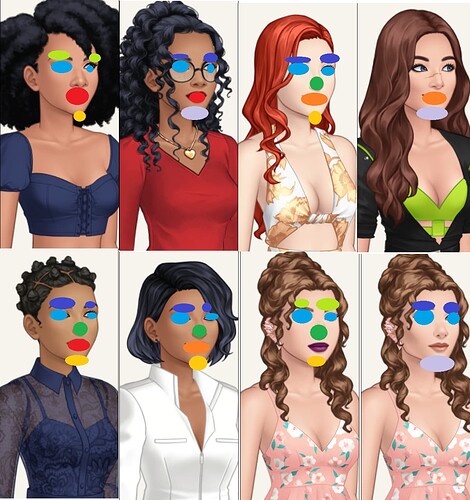 Changed skintone and eyebrows As for the eyes, I don’t tend to use these ones much

and these are actually the same, except one dont have the little cut

Moved to Art Resources since this is about character design. Make sure to check out our Forum Tutorial for more info about creating topics, and feel free to PM me if you’ve got questions.