Character should enter to an exact spot 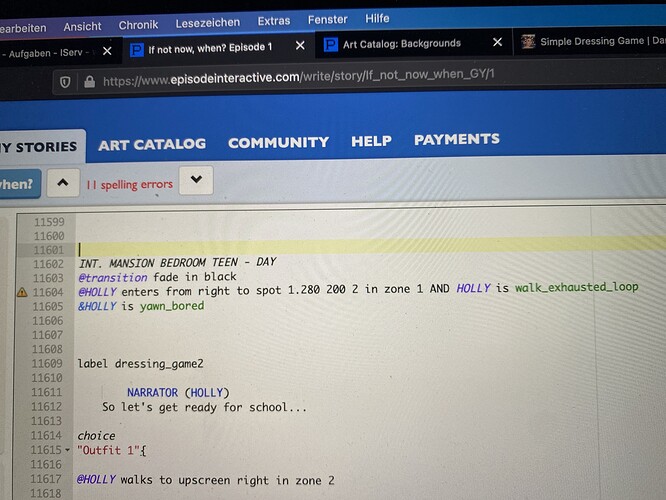 I would like my character to enter to an exact spot… not screen center/screen right etc.
How do I do this?

Ohhh that makes sense! Thank you so much!

Yeah you have to do what the person above said since that is mixing advanced coding with basic coding.

Your code is slightly correct, you just need to remove the zone. Enters commands cannot have the zone added to them. Also, when making a character do an animation while walking, use “does it while” instead of “is”

@CHARACTER enters from right to spot 1.28 200 0 and CHARACTER does it while walk_exhausted_loop

@Dara.Amarie? I hope you don’t mind if I ask a quick question:
Would something happen if I used “is” instead of “does it while” while a character is walking? I’ve used both before, and they give the exact same results: The character walks to their position while doing an animation.

“is” is meant for a one time animation and is 1 beat. If you use “is” for walking, it takes 1 beat for the animation to complete. Have you ever tried to make a character do an animation immediately after walking while doing an animation but your character goes idle for a split second before doing the next animation? This split second idle pause is due to the “is”. This is a bit hard to explain but let me give an example

If you do this:

Right after walking to the spot, instead of going straight to the laugh animation, the character will stop, pause and be idle for a split second, then finally do the laugh animation. That’s because they’re still trying to finish up that 1 beat from walking because of the “is”. That’s why it’s best to always use “does it while” when walking. With “does it while” you dont get that awkward pause