Characters, but no Plot

I need some ideas, if anyone is willing to share. I have four characters that I have created, but I have no idea what to write about. I will have a create your MC. I will also credit any users who have help me. 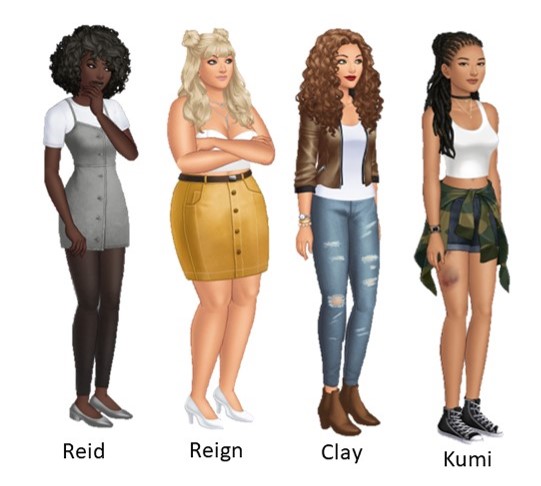 It depends on what you want to write about

They look like college students going on an adventure in a forest…perhaps they discover something in the woods that feels “off” and end up trapped/having to investigate.

Reign has a crush on Clay, who is falling for Kumi. Kumi is also madly crushing on Clay, but both are too scared to ask the other out. Reid has feelings for Kumi and Reign and doesn’t know how to interpret her feelings.

I love comedy, but I can do drama.

Ah okay. So maybe like their parents were part of a political party but the governor (can be male or female) ordered to kill them but they didn’t know that their friend (female) is still alive. So like basically the four girls get revenge, but maybe one of the girls doesn’t like maybe the MC (can be whoever you want) because the LI (the boy or girl) is bonding with the MC too much and she believes that when the MC causes trouble in the group.

This is a bit crazy but

Moved to Share Feedback since this is about story ideas. Make sure to check out our Forum Tutorial for more info about creating topics, and feel free to PM me if you’ve got questions.

I get Hangover crossed with Flight Attendant vibes from this group. Maybe they wake up after a night of partying and there’s a dead body in the hotel room with them and none of them can remember what happened. So then they have to try and piece together what went down while avoiding being arrested for murder… and the real killer is also trying to kill them, cause they witnessed it.

Very interesting, thanks for the feedback.

I suck at fantasy, but that’s a cool concept, thanks for the feedback

Thanks, for the feedback

This would be an interesting plotline.