I’m writing a story for the Magicka Contest and I’m trying to create an intro. For that intro, I want to put my characters inside an overlay which would be inside a magic fortune-telling ball (it’s part of the background) and I want them to move in there too but I’m not sure how to do that 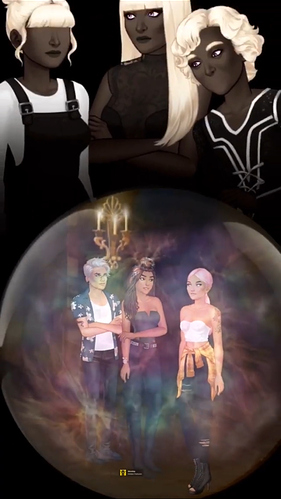 if it is part of your backgound you have to cut it out the ball and upload as an overlay.

In the picture arteus gived the bal was most likely not part of the background iti just an overlay.

Yu will eather use one or 2 overlays - in case of this picture there are I think 2 overlays one pure black hiding the bottom part of the big characters and than the other with the ball wich doesnt have full opacity.

If you will need the character in the ball to be not full body thany you will need anotothe more overlay which will look like the black one you already have with cutted round hole which will cover the outside of the ball.

What if I want the characters to move like they normally would in the background?

it depends on the efect you want to have.

Just you have to understand that overlay can cover something so use them so you will get your efect.

It is pretty similar to making character aper in TV while other are watching it its the same principal.

But without knowing exactly your scene and exactly what you want to happen I cant be more specific.

If you are not much familiar with layers:

Thank you so much! I’m pretty familiar with layers but I’ll check out that video

I’ll try explain it the best way I can haha

Does that make any sense?

Yes, it does! But no, I don’t want the characters to move out of the ball. It looks like this (the ball is part of the background)

I haven’t added characters yet since I don’t know how to but this is a pre-scene intro that will be in every chapter. There should be three characters in there.

The purple-pink stuff is an overlay BTW.

@Farah_DeSantis is right - it is similar to doing a TV scene.

Thank you both for your help!