First of all I take issue with these 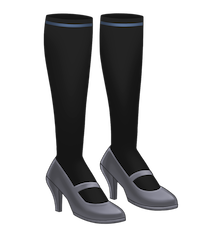 I take issue with the school uniforms in general but I’ll stick to shoes for now. What school did whoever designed these go to? I dunno if they were created out of a desire to make school uniforms more fashionable or if this is just another case of sexualizing school girls American Beauty bullshit (I don’t see a pair in the male wardrobe, just saying) but I’m not here for it either way. I went to a catholic school, dark brown shoes with dark laces, heel no taller than 1.5 inches, socks must extend passed the ankle, those were the rules. I wore shoes that looked like this :

Never had to wear a school uniform but I do have to agree with you.

I use the pilot shoes for my school uniform in my story, looks a bit weird since there is no socks but I’d rather not use the heels

The porn industry makes bank on the fetishization of young girls through means of dressing up barely adult women like teenagers. That would include scant school uniforms with short skirts and high heels, if you don’t have a problem with mirroring that image in a kid’s game fine but me addressing that problem doesn’t make me sick. Even aside from that I think it’s ridiculous that clothing meant for school kids includes high heels, I went to a catholic school, that is not how we dressed. American Beauty is a film reference, not a dig at America, even if it was I’m American so I think if anyone has the right to drag America it’s me. Not all Japanese people have a schoolgirl fetish, the fetishization of young girls is a world wide problem, don’t be racist.

Agree to disagree, you don’t have to continue being a jerk about it. YES we get your point. But it doesn’t change other people’s opinion. Except it and move on.
@gabriella
@ApneaLeela
@LiaMina

@LiaMina tag them and ask them to close it if That’s what you want.

@Jeremy @Sydney_H This shit has gotten way out of hand, let’s just shut it down!

This topic was automatically opened after 4 hours.

This topic was automatically opened after 4 hours.

Closed due to excessive off-topic and inappropriate posts. If there is an issue that needs to be addressed between users, please use the PM system to address it. I also strongly advise all participants in this discussion to review the Forum General Rules before posting on the Forums. Thanks