It’s currently 6:00 am right now, and I’m really getting frustrated. I’m currently trying to teach myself how to code an overlay for practice. I’m very confused on what I’m doing wrong.
I’m trying to make the hand overlay I have, move up like the girl is reaching for the guy’s arm. Here’s the script. Right now, instead of her hand coming up from the bottome, it’s shifting/starting from the left and then moving to the place it’s in right now. But I’m trying to get her hand to move up from the bottom. 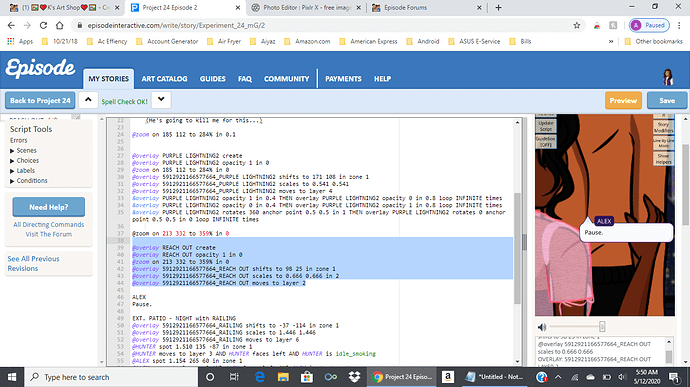 If anyone could help with this, I’d really appreciate it!

You have the first position and for it to smoothly go up to next position add time to both shifts and scales (add that in 2 after both of those). Not sure if this is the problem ur facing tho

Hi, could you show an example on what you mean? I think it’s the problem I’m having. Like, the hand overlay is starting all the way from the left of the screen and then shifting to the place it’s in on the picture, but I need it to move up from the bottom not move right from the left. If that makes sense.

Maybe make first a position on the Bottom (where you can’t see it) as a base Position.

Nope. How do you explain it… hmmm… Okay so, basically. It does go to the position I want it to STOP at which is the 0.666, but when I try to get it to start from the bottom offscreen, it jumps from the left and moves to the 0.666 location

To be honest, I’d use shift instead of scale.

this is what i currently have. I’m sorry if I’m being a bother to anyone. I’m just trying to learn how to code but keep getting confused.
Could you show an example of what you mean about scaling it in 0?

By default, the overlay starts at 1 1.

To be honest, I’d use shift instead of scale.

To make the overlay move up and down, use your shift command.

I’m interested in how to do what you’re saying. Do you have an instagram we can chat from, or would rather PM here?

Moved to Directing Helps and Tips since this is about coding. Make sure to check out our Forum Tutorial for more info about creating topics, and feel free to PM me if you’ve got questions.

So would it be

Could you send me your script, maybe I can help:)

Sorry, for the late reply. I’ll send it to you