A couple of weeks ago we shared our ideas on how we wanted to introduce gem choices to our community with the goal of better supporting authors while making sure readers had a good experience. We read your comments about the specific ideas we had and they indicated we were off to a good start. While there is still more work to do and feedback to incorporate in the future, we’re ready to start rolling gem choices out as an optional feature (like text effects, weather or overlays) to ALL Episode Authors later today!

Similarly to the slow rollout we’ve done with authors, today we’re starting by giving 15% of readers these gem choices in the app and will increase it over time. This means the features under the Readers heading will be slowly released over the next several weeks. For authors, regardless of whether a reader sees the gem choice or not, it will still count towards your gem choice chapter reads (more on this in a bit).

While we were building and testing this feature, authors were using a hacky version of a piece of Episode Official donacode - for the launch of community gem choices to all our authors we’ve created a new donacode command which includes a unique color for these choices - silver! 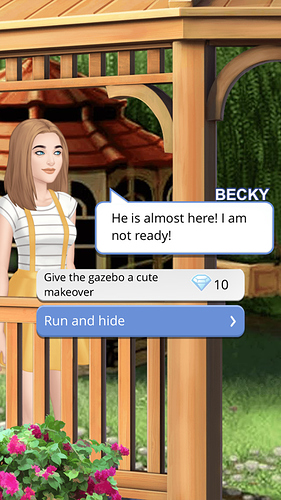 Below is the list of the features we’re releasing today:

For now, authors who meet the above criteria will be eligible to receive a 25% bonus for gem chapter reads on top of their regular Writer Payment. Please note that this is temporary while we work on building out some of the tech around these new chapter reads and payments and that this will likely change in the future.

Where can I learn more about how to use gem choices?
Here is the guide for coding gem choices in your script and here is a document to help you write great gem choices for your readers.

UPDATE: If you are an author and are testing your gem choices in the app it will deduct gems. If this happens to you, please contact support so we can help you. We are working on fixing this asap. In the meantime we recommend that you test your gem choices in Web Previewer.

The above features were designed to support authors. We wanted to make sure readers were taken care of too so we’ve designed some perks and protections with them in mind.

More ways to earn gems!
Starting today most players will get Reader Rewards which now grant gems in addition to passes. Choice of the Day is still in the works, but needs more testing.

Gem choices in User Stories will have automatic pricing.
The community was worried that prices for gem choices would be too high so in community authored stories these choices will have prices set automatically. For now, prices will be capped at 10 gems or less. During the rollout phase a small number of you (2.5%) will see these prices as 15 gems, you will also not see the tiered gem choices described below.

The first Gem choice encountered in every community authored story will be FREE
Many players have strong feelings about gems choices and are worried about the quality of choices you might encounter. We’ve made the first gem choice encountered in any Community Author’s story automatically FREE. This gives readers a chance to sample an author’s work and gives authors the opportunity to prove their choice writing skills. Again, a small number of you (2.5%) will not see this for a limited period of time. 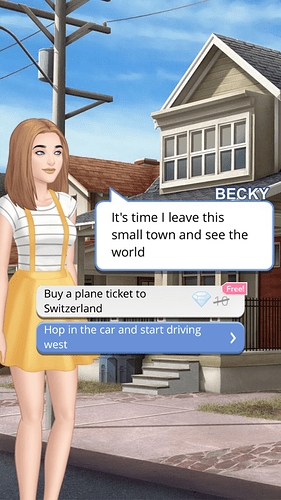 Ability to report gem choices and have them reviewed by Episode.
As a reminder, reporting a story or choice means it will be reviewed, it does not guarantee it will be removed. We’ve expanded our in-app reporting tool to allow readers to flag choices that appear to be low quality. Players can also report choices to our support desk. Some reasons to report choices might be: it’s not in line with Episode’s Content Guidelines; it requires you to pay to continue the story; it does not deliver meaningful content. We will be monitoring reported choices and listening closely to reader feedback.

Ability to request refunds for gem choices that are low quality.
While this feature is new, we are fine tuning it and developing gem choice content standards. During this time we will be lenient about players requesting choice refunds from our Support Team.

As always, we look forward to hearing your thoughts and comments below.

So if I accidentally reported a story, I can pay to UN-report it so it’ll be available to read in my library?

When you report a story, accidentally or otherwise, you now have the option to remove it from your app or not. No payment required!

wasn’t really a fan of this in the beginning but i think it looks really great! excited

Sounds about good, especially 2 gems thing, I’ll make a short story with it. I guess I won’t be seeing y’all in therapy.

If you have 100k + wievs gem choice must be 10 or you can change it in lower price. Sorry if my english is bad.

For the time being authors won’t be able to set the price of their gem choices. It will change between 2-10 gems automatically based on the number of reads you have.

I won’t personally be using them at all, but it is nice to see that this idea has been thought through very thoroughly as there were a lot of issues/questions raised about this

For authors, regardless of whether a reader sees the gem choice or not, it will still count towards your gem choice chapter reads (more on this in a bit).

Quick question: does this mean that readers who can’t see the gem choices yet will be able to select those options for free? Or will they not be able to choose them at all?

I totally agree! I saw their post and was thinking “Oh no, what kind of mindset were they in when making this?” But I convinced myself to look at the forum post and I’m glad I did, because it definitely gave me reassurance with the limits and such.

I do think it’ll be a hit and miss with people but personally I am looking forward to using this in the future once I’m more confident with my writing skills.

For now readers who can’t see the gem choice will see it as a regular choice. They will still be able to see it as an option though. And for authors it will still count as a gem choice read.

Is the gem choice in chapter 1 needed, if I want to include it from chapter 2 and later?

only if you want to qualify for the bonus Writer Payment

If you read the post there is a small group of players who will see it as 15 gems. Looks like you are in that group!

I have to admit that I didn’t like that idea at all, as a reader and author, but now it’s much clearer and I love the idea! It sounds cool

Would I need to use gem choices for all my stories? Or could I limit it to one or two?

Oh btw, I have a little problem about the gems I don’t have the choice of the day to get one gem a day yk? It just stopped after I once decided to give gems for a choice… Idk how to fix it???