So I’m bouncing between this one troublesome scene and dreading another. A) The troublesome scene is where I’m attempting to spot direct two separate crowds in different zones. My MC (DEON) will be walking om the background (layer -9) in time with his security guard passing crowd 1 in zone 1 (camera following this action) and walking into zone 2 with the second crowd.

From what I have now, when I test it everyone pops up and my MC just ain’t walking right its a total MESS. 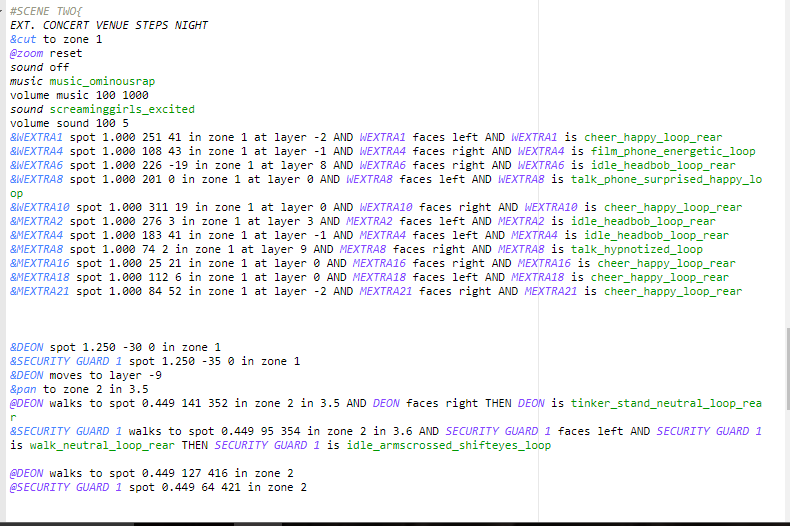 So if this can’t be fixed, does anyone have a concert, concert crowd, or paparazzi script template I may use with credit of course.

Not quite sure if this helps, but try :
&zoom reset instead of @zoom reset

Hello,
I’m not entirely sure why your characters would be popping up but as Martini suggested change the @ to &zoom reset.

As for the walking part, you say the guard is walking with Deon however, the way you have it coded, the guard will only walk to that spot “after” Deon gets there so I would just change @DEON walks to bla bla to & and change the security guard one to @. That way they can walk together.

Also at the end of that screenshot your characters will jump to new spots because Deon isn’t timed for when they walk to that spot and that spot is quite close to the previous spot you have him walking to in the beginning so he might go to that spot too quickly like a jump more than a walk and the guard is just spotted to be in a spot but not to walk to it so he’ll just jump to that spot as well. I would put a temporary pause between that. And see if Deon and the guard are already walking to where you want them to because you likely don’t need those last spots there or you just need to change where they are walking to in the first walking codes.

So put a
NARR
Edit.
Right after they first walk to see if they’re going where you want them to first. Ultimately I don’t think you need the last two lines. You likely just need to remove those and if they’re still not walking where you’d like then just change where they walk to. So only keeping one code for where they walk to. But I also don’t know what your background looks like to understand why you’re having them move to a spot close by. But if there’s something in the background then I would give it a little pause before making them move again so they can tinker for a little and then move elsewhere.
I hope that made sense.

Okay, so I was able to grasp the first portion of advice and make edits set to that, but I’m still having trouble with fixing the crowd and DEON and his security guard walking.

I’m going to dm you.

Also the right command for walking is

and when you use is instead of does it while sometimes it works but often it doesnt work and they do not walk.

to make 2 characters do animation ( or walking) together with pan the usage of & and @ will be:

all with & happens together with @ under it.