Hello guys, this is the continuation of A topic created by me “Stop insulting episode authors”

So in this I didn’t want to talk about people insulting them, but moreover I wanted to discuss This exact story written by @/emily.writes, 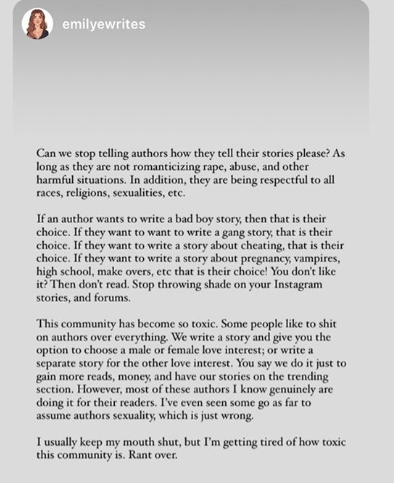 This is something I wanted to talk about forever because what emily has written is true, Now I have seen tons of topic saying saying "Why are teengaers dating 500 year old vampires " and many other things, I won’t mention anyone who has written this. I just wanna say If you don’t like the damn story then don’t read it!, There is no need to go to an authour complaining about stuff like “Your story has is so cliche!”, You know you may not realise this but by saying these words you are doing a lot of harm, And that needs to stop!! Because no matter what you think about the story, not everyone will think the same thing. I see many authours here that are scared of writting a story because they are scared of the hate they will get and you know what?? Sometimes I am too. Because I am constantly thinking that no one will read my story if it contains any vampire or cliche.

Sorry If I tagged you twice

Thank you for the tag
I appreciate it
Guess what
I can’t agree with you more
It’s exactly what I thought too
Like you actually have the option to “NOT READ” so go read something else which you actually prefer instead of criticising authors who put so much effort into their stories
Besides it’s not like that author Actually forced you to read it duh!
AND OH JEEZ …I didn’t know that they even shade over authors cz of the numerous love interests
Cz if these stories didn’t have them then the same people will start blaming authors for not having so many love interests and so on
Maybe they should try and deal with how a story is coded
And don’t get me started on how difficult it will be with when having more love interests

Thanks for tagging me.

I totally agree with your point.
Unless the story is really problematic, then yes, readers have a right to report it and give constructive feedback to the author to improve the story.
But this isnt the majority of the stories that are problematic.

The readers has hundreds and thousands of stories to choose from. If they have chosen a story which isnt to their liking, just stop reading it. No matter the story is from a big or small author, all these authors had put in lots of effort in their story and giving a single hate comment will definitely put a toll on them.

The story is such for a reason, the characters in the story acts for a reason, and the list goes on. If those arent your liking, just quit reading it and you don’t have to hurt the author for writing as such.

Hope this thread gets more attention, and this ‘hate comment trend’ comes to a halt.

i agree with the instagram story, i agree that just because someone is writing a story about a bad boy/mafia leader (i’m not too sure about the mafia part, it is not realistic to life at all and it should not be encouraged in stories. mafia’s are not what they seem to be in these stories) it’s okay unless they don’t romanticise offensive topics like harassment, violence, etc.

If you don’t like the damn story then don’t read it!

i would just like to clarify, when you say this do you mean we shouldn’t talk to authors when they have offensive topics in their stories?

No I mean, If the authour is actually putting something wrong, then talking and telling them is neccasary, but when a story is perfectly fine but you just don’t like how it is then reading the story is not neccasary

okay, i just don’t like this phrase “don’t like, don’t read it”. everyone has the freedom to give their own opinion right? so technically people can still tell the writer if they don’t like it.

The readers has hundreds and thousands of stories to choose from. If they have chosen a story which isnt to their liking, just stop reading it. No matter the story is from a big or small author, all these authors had put in lots of effort in their story and giving a single hate comment will definitely put a toll on them.

I agree, no one should tell an authour to change their story if they don’t like it because it will have a huge impact on their motivation

I do get what you are saying, everyone has their opinion and I respect that, but I’m just saying if an authour hasn’t written anything bad, then there is no reason to give hate

i’m not talking about hate speech here! nor am i encouraging it.
i’m just saying if readers dislike parts of a story, they’re allowed to say it “if you don’t like it don’t read it” seems like a stretch.

oh okay now I understand, sorry I was a little confused and yes if a person really doesn’t like a story or has something bad in it, then I do think it would be appropriate to talk to them

great! i’m just saying that everyone is allowed to give their opinions whether the author likes it or not. everyone get’s irrelevant things in their fan mails, and it’s up to the author to take it in consideration if it’s a genuine problem- freedom of speech.

Thanks for the tag!

I agree with you, imo, if you have something to say that isn’t exactly constructive but instead is more heavily based on your personal preferences, I don’t really see the need to complain about the story

I do sort of get this thing especially after I finished one of my first stories, someone sent me many messages telling me how much they didn’t like the ended and that the ending should’ve let the LI end up with the MC and stuff like that. But then again, people are entitled to their opinions and I do disagree with leaving these kind of comments but people are bound to do it and it all really depends on how you take it

This is so true! Just don’t read the story if you don’t like it!

Thank you for the tag. And I completely agree.

But the issue is many of those stories do contain the harmful elements that are written about in the post. It’s not just the fact that it’s a mafia story or a bad boy story or whatever else. And it’s certainly not only these types of stories that contain harmful content, but any time we put something out into the world we have to accept that people have the right to offer criticism of it - even if we don’t want to hear it. Especially when that criticism involves explaining how something we wrote perpetuates harm. It’s different from just having a preference.

I don’t like historical romance because it’s not interesting to me, so I just leave it alone. I don’t like mafia stories because by and large they include a romanticization of violence. Even if that romanticisation isn’t intentional or if the mafia boss “doesn’t do all those Bad Crimes” like murder and r*ape. There are a lot of posts on the forums and on IG that explain the history of mafias and how ignoring those legacies for a story that paints people involved in those organisations in a positive way makes light of all the suffering they caused.

Many stories in all genres with a wide variety of plots use stereotypes for tokenized, two-dimensional friend characters- the most common are the Black Best Friend (who almost always has european facial features and exists to encourage MC to party and / or as the personal cheerleader for the MC even though the MC forgets her existence after meeting the LI) and the Gay Best Friend who is hypersexualized and often harasses other men (including the LI) and violates women’s boundaries on the assumption that it’s okay because he’s not sexually attracted to women. Having these kinds of characters is dehumanizing for the people who are part of these groups and mostly see these kinds of portrayals of people like them in media. It’s certainly a problem beyond just Episode and I don’t think anyone would claim otherwise, but we have a lot more control over content on episode because of its community portal and because we’re personally interacting as writers and readers all the time.

At the end of the day, we all need to ask ourselves is it really more important for us to write a story exactly how we want no matter how it might hurt or negatively influence people than to revise parts of the story and provide better representation and reduce hurt?

I’m assuming that insulting in this topic means the baseless criticism authors get in their stories and in the worst case themselves as a person, then yeah.

I’m not for the “don’t like, don’t read” argument though, since every story has at least some criticism to face, and can be used as a step to improving the author’s writing/directing. it hurts of course, there’s no way to invalidate that at all, but the authors need to know what influence they have over their audience and fanbase, and the fanbase’s influence and effect on the author, if there’s a good chunk of respect between those two, then there’s little room for insults (internet etiquette).

that’s until the criticism is actually baseless and without evidence, then yes, stop insulting anyone for that matter unless theres a point in all of it. If the goal is to just make the author feel bad about themselves, then please go to the nearest exit and take the degradation elsewhere, its unpleasant to the author and to the rest of us.

I’ve taken my individual college thesis and gotten criticized a ton for my drawings for multiple revisions, there’s absolutely no room for me to say“well if you don’t like what I did, then don’t look at it” and instead used it to improve my work because thats what criticism is supposed to do, instead of letting myself whine and moan over it because all 3 panelists on my study simply did not like my work at all.

You guys might not agree on this,
but hey-ho I’m entitled to my own opinion

Yeah I definitely agree to what some of you guys said

Everyone has there own opinions but when its just hurtful to others just don’t. A lot of big authors get hate mails, or even some regular, because there story is to ‘cliche’. Yes I understand that we don’t need to romantisce everything but it’s your choice what you read. Others might find it appealing and amazing to read. Everyone has there own tastes, personally I wouldn’t watch a movie about someone locking someone in a basement and kill them, but to be honest some might. We all think different and were allowed to have our own opinions but when it comes across rude and your trying to force it on others Nuh uh

Go ahead and tell authors you dont like their story. It’s just an opinion. The same way if you walk down the street and see someone wearing an ugly shirt. I guess you can tell them it’s ugly if you REALLY feel the need. But what does it really do for you? Does it make you feel happy?