The same goes for backgrounds that don’t loop?

Characters are automatically placed behind overlays. But once you add a layer to the overlay, then characters will now be in front of the overlay by default. Using the commands “enters from” and “stands” will place the character at a default layer.

So if you want your character behind the overlay, remove the layer from the overlay.

But if you need to layer the overlay for a reason (like you want a character behind then another character in front), then you need to place th character at a spot offscreen with their layer then have them walk to a spot onscreen

I know this isn’t a very important question, but I’ve been trying to find this piece of clothing for a while now. It’s the checkered sort of tights(black). Not the herribong ones.

Is this ink or limelight, male or female?

Is it the fishnets you’re looking for?

I hope you can understand this

I think it’s something about the brackets?..

gain IRIS_default
#This will let you check if they made this choice later.
goto afterdg1

“Something rocky.”{
@CARA previews outfit JADE_default
####REPLACE THIS WITH ONE OF YOUR OUTFITS####
@CARA is admire
@pause for a beat

gain JADE_default
#This will let you check if they made this choice later.
goto afterdg1 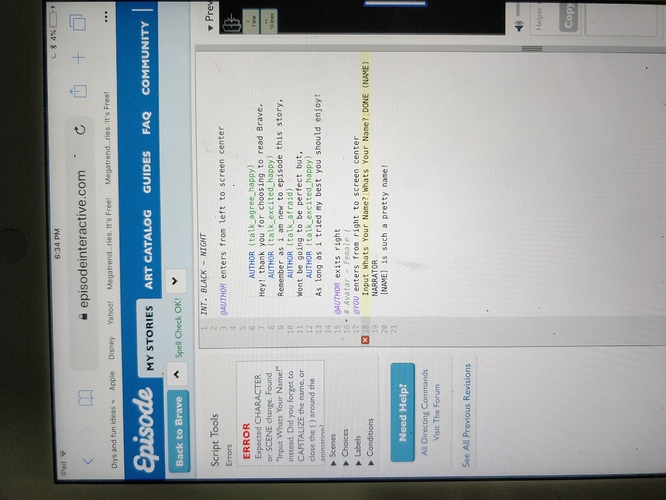 Yes, just cut to the zone and zoom in on your characters in 0 seconds.

Can you show an example of a spot code with that symbol?

You’re missing 2 brackets. But the format of your “dressing game” is a bit weird. If you click on the link in my template, I have a simple dressing game template there that you can use.

“input” needs to be all lower case

I know how to make a character and background fade, but I am trying something different. I have been playing around with the overlays and layers, but I starting to think what I want to do is impossible. Thought I would ask before I give up.

I’m trying to make a character and the background fade away into another background with another character. So, character 2 will be standing in the exact same position as character 1 who faded out.

I hope this makes sense.

Thanks for the help in advance.

Please help! I am trying to have a choice be remembered in a different episode: The main character had a decision to kiss one of two people in episode 4. In episode 5, I want to have the main character address her choice. Is it possible to remember choices across episodes? If so, how?
And I’m sorry, I am new and have no idea what a gain is!
Thank you so much!!!

: HOW TO: Remember Past Choices (if/elif/else)

Hi! I was using your first character customization template. I followed your instructions but I get a warning that says “The label female_custom does not exist”