you said, “are you dumb” to my comment that stated, 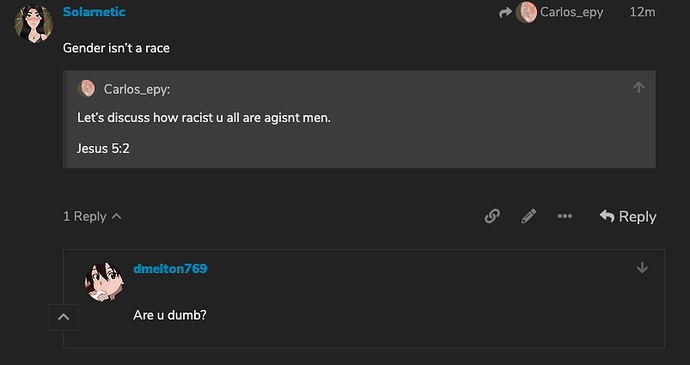 What is it then?

someone else brought it up, I was correcting them. Replying to the wrong person

@Solarnetic said what she said gender is not a race period.

Where is that from?

Hello! Well, this was not how I planned on spending my Sat. morning. A couple of things:

I’ve dealt with the issue for now and will let Sydney do cleanup on Monday. Thank you to the people that flagged, if you hadn’t I never would have seen it and it would have kept going allllll weekend.

@Sunnytheauthor if you still want this thread closed would probably be a good idea to DM @Sydney_H so she sees it first thing.

I understand where you are coming from, but then based on your point/comment, everyone is entitled. if that’s how you see white entitlement. Since I think many of us have put our opinions in places that many people might have not wanted or needed.

That’s their classic response to when someone tells u that u have privilege.

When someone basically tells u, they worked harder, fought harder & pushed harder to get to the same position. And tbh, it makes me want to scream. Then them going ‘but my parents r divorced, so my life is just as hard as urs!’ n whatever other excuses they’ll make to try make it seem like their life is harder. To all my fellow white ppl: it’s not always abt u, so shut up.

this is an extremely needed discussion, thank u for making this. n for all the white women who might try argue w this- how do u feel when a man starts victimizing himself on feminist posts on Instagram? Well, try think abt that before u hijak a thread trying to b involved w a matter that doesn’t concern u, so don’t make it abt u, ok?

Oh my god! Can you stop making this a racist thread because it isn’t.

What the!??? STOP BEING IMMATURE

She is just sharing her opinion and everyone has the RIGHT to do so. So please stop hating on her or anyone else.

Not trying to sound mean but aren’t there better forums/sites to discuss problems like these which I agree with? This is a forum based on a app mainly marketed towards on kids and teenagers, so this forum is filled with kids who try to use racism to sound edgy and are not educated on the topic. Plus it just more work for the mods. They said they didn’t plan on this and even suggested to lock this thread. Just wanting to point this out because all this “ALM” crap is upsetting and kids are getting exposed to these wrong views and might adapt them.

lol yeah this thread is a mess. Yeah I feel like there’s this weird thing where a majority group want to be included in a minority space. Like these types of conversations where minorities talk about relatable experiences somehow becomes a competition for the majority group to butt in and say something about themselves. Like maybe women talk about how they feel at danger walking alone at night and a man night butt in and say “I feel scared walking alone at night too!” … Like okay? We didn’t ask and we didn’t say you weren’t incapable of fear lol.

I think that a lot of people who are minorities seem to understand and are okay with being excluded in conversations about specific races, genders, sexualities… Maybe it’s because we, as minorities, are used to being on the outs of the majority whether it’s in our daily lives or just looking at the media we consume, knowing that the people we watch don’t look or act or have similar experiences as us, that we understand that not all conversations or topics are relevant to us.

Meanwhile, people in majority groups are used to doing things they want and being accepted in most spaces so they may get defensive or even offended that they can’t like, for example, say the N-word or wear box-braids get offended over the existence of the Pride Parade and Pride Month or International Women’s Day.

Thank you for putting that into words.

and that’s on periodt

Oh boy I knew this thread would become a mess the moment I read OP. Oh well

Anyway, to my original point, I would just like to add, to all the ppl arguing w the original points made by the op: if ur white, u have most likely grown up w extreme privilege that u may not b aware of. That’s ok. u haven’t done anything wrong, however, u need to acknowledge ur privilege & make sure u know that ur race doesn’t make ur life difficult, perhaps other factors do, but not ur race.

There’s no need to get defensive abt these matters, just pls acknowledge it & understand it’s not always abt u, sometimes there r things ur not involved w, ok? I recommend educating urself on this topic & not denying it, if this thread isn’t directed at u, if u don’t do this, then that’s fine, she’s talking to the ppl who actually do this. And if ur one of them, maybe think before u type. Bc sometimes ur response is only self centered n unnecessary. Thx.

Ok, that’s all the attention I will give this thread !

If it’s up then it’s stuck