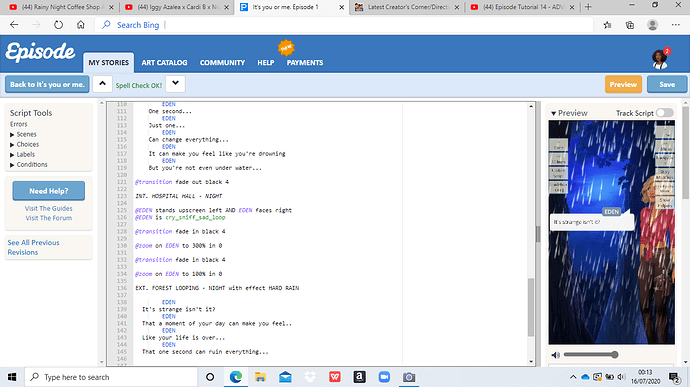 @zoom reset to zoom back out

when a character talks they will automatically pop up on screen if they have not yet been added to the scene. So either you need to direct her to another zone or you can write

To fix the zoom it’s like this:
@zoom reset

If you don’t want her to be in the forest, you should write it like this:
EXT. FOREST LOOPING - NIGHT with effect HARD RAIN

NARRATOR (EDEN)
It’s strange isn’t it?
That a moment of your day can make you feel…
Like your life is over…
That one second can ruin everything…

Oh, thank you so much. makes more sense

Oh, just changed that ,thank you by the way would i reset the zoom before the fade black or after?

Thank you, fixed the speaking and zoom but Eden is still in the scene

And I don’t know how to get her out. I’m only trying to get her in one scene the hospital bit. But now she’s also in the scene before that. 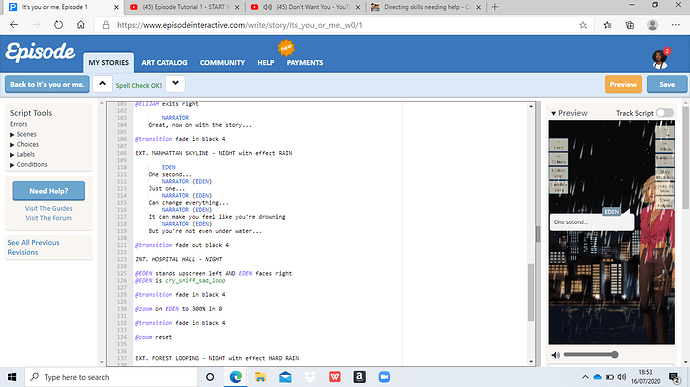 You forgot to change line 110 to NARRATOR (EDEN) instead of EDEN.

After the fade black.