Enemies to lovers, the trope of people who hate each other, but end up falling in love.
But there is a diffrence between people battling it out, and people just being abusive,

it’s an enjoyable troupe, because of the wait, the when will they, the fizzy comments to each other. the struggle. and the feeling of forbidden love. 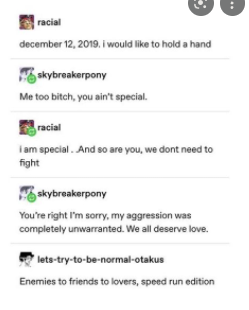 There exist many diffrent versions of enemies to lovers .

enemy with a crush
this is often the Hero hate the villian, because they are evil, but the villian is in love with the Hero, and flirt with them between fights, it can be a bit creepy because no one like been creeped on.

An example of these I can think of is, Kisshu and Ichigo from Tokyo mew mew.

it can also be hidden love that the Hero does not know the villian has a thing for them. and the villian is slowly going mad because they are in love with their enemy

Friends to enemies.
Have you seen She-ra, her and Catra is a great example of this. the two great friends, seperated by the cause fighting on each their side.
how will they come togheter, after all the hurt they have given each other.

Rivals
Acedemic, work place, soliders, spell casters.
fighting to prove who is the best. are they fighting for a scholership or the best grade, the new promotion. or maybe to impress the other one. no matter what they both wanna be the best

Opsite ideals
Police and criminal. royal and rebel, vegan and meat lover. on each side of their case. a case they can not compromise because it will go against who they are.

for this love to happen one has to though, but who will it be,

Bully and victem
Personaly this is the one I like the least. because the power dinamic is very unbalance.
slave and slave owner. prisinor and guard, the bullied and the school bully. weak peasent and powerfull king

all these has that in common that all the power is on one side, and the other one got nothing. sure the weak one can stand up and fight, but the risk is to high, and they can be hurt by the one in power.

enemies to lovers often have fights, can be toxic, and they get hurt. but both do it. they both have controll thats why it works, when only one has conetroll it feels wrong. because the situation feels more abusive,

enemies to friends to lovers
it explain it self, they are enmies they become friends, usally by haveing a common goal, and then fall in love after

another trope much like enemies to lovers, is the redepemption arc where the villian become of the hero side. this is sometimes also what the enemy in enemy to lovers need to do, to get the one they love. or they did it because they where in love.

now how do you write a good enemies to lovers.

What to do
obviosly it needs to be a slow burn, they cant be on same side, and they can not be dating by chapter 3. it needs to take time

it needs to be realistic. MC isnt gonna blush over him by chapter 2. if you wanna write enemies to lovers, they shall not act like have a crush on each other but wont admit it. serisly

they are gonna be toxic. I know we all hate toxic. but they are enemies. they need to be problematick,

there also need to be a reason they are enmies, it cant just because, oh no she said something rude, time to make her life hell. give them a real reason to hate each other,

Dont over do it, if one is evil they will do evil stuff. but if the enemy is gonna heavly abusive the Hero, kill people they care about, destroy the world. it makes them hard to like. to much will make it very hard for the reader to support the reletionship

DO NOT MAKE THE REAON THEY BECOME LOVERS BE BECAUSE MC THINK HE IS HOT.
in enemies to lovers it needs devolpet, respect emotions. it cant just be because now she gave him a boner.

which also reminds me, make the devolpment happen, dont go from I wanna murder, to them makeing out. enemies to lovers has to be slow burn.

Moved to Episode Fan Community since this is not about story ideas or reviews. Make sure to check out our Forum Tutorial for more info about creating topics, and feel free to PM me if you’ve got questions.

i really agree! I hateeee when it’s rushed. I love slow burn, and my all time favourite trope is enemies to lovers