Episode just released a new featured story by the author Vidi titled My First Kiss… what do you all think of it?

The plot is:
Was I out as a lesbian in high school? No.
Did I have game? No.
Did I kiss a girl anyway? You bet.

As always, please keep the discussion and debate civil. No major arguments over if you like or dislike the story, and please be respectful of others opinions.

Now, let’s see what everyone thinks:

I don’t have it as a featured story yet, but I know it was on the Editor’s Picks shelf for a long time and I read it there and it was really, really cute and I definitely liked it!
Once I have the featured version, I’ll read it and come back for a more informed discussion.

Also, everyone please remember that the author of this story IS on the forums and will probably read this topic, so even if you have criticism, keep it constructive and think about whether what you say could be hurtful or not. I’ve only spoken to her once, and briefly, but she was super sweet. Let’s not make her sad.

oooo sounds like a nice story, i’ll read it once i have it

I just started reading it, but it’s not the featured version (I figured I’d get in before the gem choices come in to play). I am liking that there’s a lot of choices. Most have 4 options to choose from

I read it before it was featured. It was a really good story. I don’t know if I want to see what Episode’s done to it.

Hello! Congrats on being featured

I found the story but it’s not in the Featured section, I had to search it up. The cover also doesn’t look like one of the Episode featured covers so I was wondering if it’s a featured story @Vidi

Sorry, I’m not trying to sound rude or anything, just wondering. I’m going to give your story a read tomorrow (as it’s almost 12 for me here

Hm, well it seems that this story is not available on some devices yet (as a featured story, at least) — because, for me, it’s on the front page, has a new cover, and offers gems 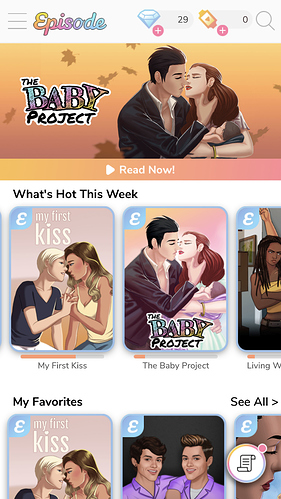 It seems Episode typically releases their stories to a part of the readers and then waits a few hours to see if there are any random bugs before releasing them to everybody (at least that’s what they’re doing with this one). I don’t have it myself yet either, lmao. It should be out to everybody very soon.

I read it and it was super cute! I loved seeing female characters be all supportive, and some of the choice responses were A+ Hotness is really a social construct lol. I hope it does well!

I woke up this morning and the featured version was there. I can’t believe I’m saying this, but I like the featured version more than the original one I started reading last night. I felt like it had a stronger introduction and the gem choices aren’t all that bad. The gem clothes are super cute - I’d still never buy one, but can appreciate how cute they are. I think the episodes were short, but that didn’t really bother me too much. Only thing that really bugs me is that no one in my family looks like me, but I’ve noticed that with most of the new featured stories, and the cover looks like a girl kissing a guy. Based off of the blonde hair, I’d think it’s MC kissing Joey. I guess that would make sense because it looks like a lot of the story will revolve around him trying to kiss her.

And…I knew it. Gem choice in the first chapter. I definitely prefer the original.

Well, there sort of has to be gem choices because it’s featured now

And I think that’s dumb. The stories should be 100% free.

Only thing that really bugs me is that no one in my family looks like me,

Isn’t the MC adopted?
I’m pretty sure that’s mentioned in the original and in episode 2, the MC mentions growing up with her sister in a children’s home. I don’t think they’re biological sisters.

Oh, I must have missed that. Didn’t read very far in the original one yet, and didn’t notice it in episode 2

I think it was mentioned in episode 1 in the original. I’m reading episode 2 of the featured version now. It’s really just mentioned in passing so unless it comes up again later, it would be very easy to miss! If I hadn’t read the original, I probably wouldn’t have noticed.

Just want to say that I just finished all the episodes and I love that our FREE choices actually influence our relationships. That’s cool!
I’m enjoying this story so far