Mine is called “Protect Me.”

maybe they’re testing out titles to see which ones do better?

Definitely. Problem is with the glitchy ending, they won’t get many results. Mine doesn’t end on a black screen, but it does freeze on the TBC message at the end of episode 1.

I know that no title is unique, but I swear episode looks at stories in the app and think themselves “Yeah, okay lets go with this title.”

This title is basic, but it fits the story more since Darius is the bodyguard of Cara.

Where did you find that out?

Oh I was being sarcastic.

Mine’s called Always, I’m reading it now. I know this isn’t a comedy but I’m dying of laughter at the first few scenes with all those body guards

. Seriously wonder how Earl would react to this

Oh, yeah. “Protect Me” is horrible. “Always” is basic too, in that it could be about anything, but it’s not as embarrassingly saccharine and on-the-nose as “Protect Me.”

I didn’t take any, whoops

Maybe with the numerous times the story fades to black though, I think the story was labeled 0 out of 0 chapters for a reason

I’ve got it too! However, mine’s called Guarding Your Heart. It has the same cover and everything, though, so I know that it’s the same story. 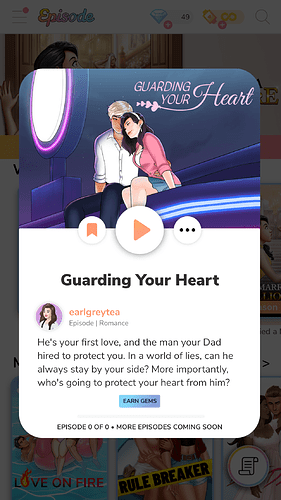 Update: Earl Grey confirmed its eventual release. Odd to know that she covered the number of episodes too 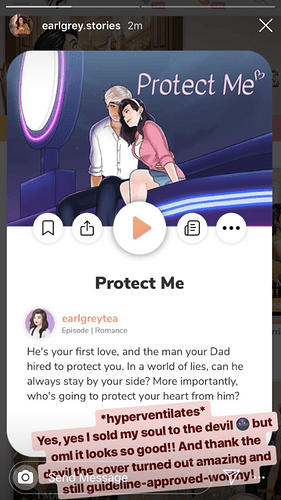 I’m wondering if it’s not some sort of bug/glitch on episode’s end? Like they meant to release the first 3 episodes but somehow something messed up?

I haven’t gotten the beta story but I loved the original version of always. And no it’s not just some cliche romance between a bodyguard and rich girl. There’s a lot more going on.

This happened to me when I read In My Bed, however, I read it when My First Everything was out and completed.

The blackout thing and zero amount of choices, but eventually it went away after like 30 seconds.