Discussion : The Earl and I

I’ve literally just stumbled on this just now in the app. Congrats to Dean Rivers (The name kind of reminds me of the character in Zoey 101 lol) for this feature. What does everyone think of this?

EDIT: From checking out the author’s profile, I found out Dean may be the first genderqueer author who’s gotten featured, so double congrats! 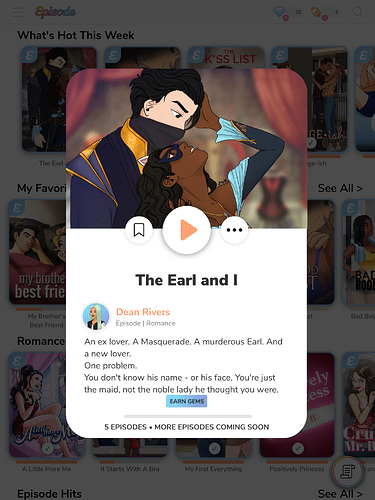 I have read it before it was featured. I loved it very much

Ooh another featured story? I’m assuming this is beta testing. How is it so far?

Omg omg omg! I love her and that story! Clearly, I’m a stan. Episode bought this story from her? Not surprised… It’s amazing. Although I’m afraid episode will fcuk it up

I was a little surprised to see it too.

I was halfway between “Yasssss Bean” and “The Bean sold out to a company that’s known as a joke around the internet, makes their brand off of microtransactions, and has a body count of at least two stories that it has purchased and then subsequently turned into a pathetic shell of their former selves.

The original was pretty good imo. Here’s hoping that the remake will be better than all evidence says it will be.

Mmhh… I haven’t read it.

Pretty sure this story won a contest (missed connections contest I believe) so that’s pretty cool and interesting! And they’ve kept the original cover art as well.

Yeah, I saw it on featured too. Read the original before, and it was a good story.

I don’t have it yet but I’m so friggin happy for Bean!!! The original was amazing and this deserves to be featured!

Beaaaan I can’t wait to read this!!!

I was halfway between “Yasssss Bean” and “The Bean sold out.

Or we can be halfway in between “yassss Bean” and “Bean is a phenomenal writer with a phenomenal story and was finally recognized by a legitimate app, so she now has a writing credit that can be used to open the door for writing in other places and is now being fairly compensated for all of her hard work,” maybe?

I took a lot of them

I’m so happy for her!
But I was really surprised to find that it barely seems to have been changed at all. Like, to the point where it still has reader messages and stuff thanking people, and it still has the original art work and everything.
Not that I think it needed to be changed, I’m just shocked they didn’t.

Read it before it was featured, and absolutely loved it!

I haven’t read this version yet, only the beginning of the original. I am pretty intrigued of the period romance already. Does this one have gem choices?

Okay, so one of my favourite things already about this is how neat the CC template is. Changing the skin tone has its own matching lip colour, and I approve!

(Okay, I guess it was unclear, my reason for posting this link is to show multiple reasons why some people would hesitate to sell their work to Episode, and some of the ways it hasn’t gone well or could hypothetically go poorly. To justify my hesitation to view this as an absolute win with no potential consequences.)

Would you sell your story to episode if asked for it to become featured? Episode Fan Community

So there have been a lot of authors who have given episode the rights to their story so that it can become a featured story. If episode emailed you saying they wanted to feature your story, would you say yes? Whatever your answer is, why? This is something that I’ve thought about for sometime lol and I don’t think I ever would. I would like the rights to my own story

Coincidentally, if you scroll, you can find where Bean describes their thought process for selling this exact story haha.

I don’t know how your edit or explanation fixes the overall negative tone of the initial comment. Honestly it makes it worse?

I said what I said. How about we just be happy for a fellow author for once? Just once. One time. Just the one. Shouldn’t be that hard.

It’s to my understanding that they haven’t changed much of the story, which makes this even better because now there is a great, high quality Episode Official story that we can be happy about it

And haven’t we been asking for that?

This is starting to get a little prickly. I never said I wasn’t happy for Bean, I said that I hoped Episode treated Bean’s story better than they’ve done with others. This is hopefully Bean’s stepping stone to higher things, but it’d be undermined if Episode had treated Bean’s story less than they deserve.

That said, it is nice to see Episode choosing a story that’s not only outside their usual generic bad-boy choice (ie. something with depth, genuine human relationships, a plot twist, etc), but is also the right length for them to feature the entire thing without washing down the plot or scrapping the last half.

It’s to my understanding that they haven’t changed much of the story, which makes this even better because now there is a great, high quality Episode Official story that we can be happy about it

^ Exactly. Now that I took a better look, my worries were pleasantly proven wrong, this time anyway. I really do hope (and expect) that Episode clearly sees that they’ve made an excellent choice, and changes the way they make decisions about which stories they should get and how they should feature them. I’m a pessimist obviously lmao but I’m ready to be pleasantly surprised if Episode continues along this path.

Episode: -features The Earl and I and does it properly-
Everyone: “You see? This is what we need! Good stories and some self-respect.”
Episode: -subtly crumples paperwork for Pregnant by a Bad Boy Serial Killer Werewolf- “Yeah haha… you’re right… good stories from now on.

Story wasn’t my cup of tea, but congrats to Episode.