Discussion: The Guy Next Door

Hey, so I’m not entirely sure if this has been officially released or if it’s still in beta, but I spotted a new featured story by Sophie Alice called “The Guy Next Door”. I read the first three chapters of the original and compared it to the featured version and I didn’t see much of a difference. The gem choices are used with dialogue choices and clothes. Unfortunately, I didn’t take screenshots of the first two episodes of the featured version, but the screenshots that I have are from the third episode (also, I didn’t see any topics about this story, so I thought I’d create a discussion. Let me know if there’s one already created). 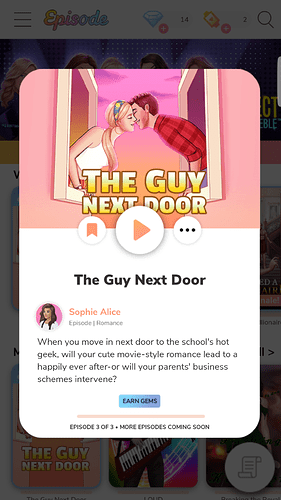 So, if you’ve got the story, whats your thoughts on it?

I think this needs to be under episode fan community. I read the original story of this which was good, in my opinion. I wondered if she was going to continue this, but now I see 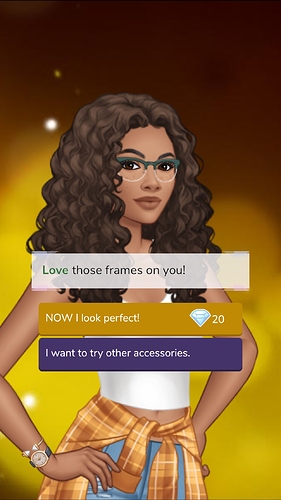 Yeah. The extra features they added into the customisation were pretty cool. Especially the eyebrow piercing and the wrist tattoo.

Yeah, 20 gems for a nose piercing is bananas. I also didn’t care for the fact that there were no non-gem choices, at least in the first episode.

I, for the very least, like the hand so hips at camera animation they have. It is pretty simple but great for some reason.
Also found it weird that adding special features used gems, but all for extra CC either way.

I just had a choice to pay 15 gems to decorate MC’s room with a succulent.

That is an Episode meme waiting to happen

I had the same reaction. I, of course, did not pay for the succulent. So what did she do with her poor succulent? Just leave it in a box to die? This is tragic…

The mom constant need to tell us how we look basic in our clothes is annoying. I’m not going to spend 20 gems to stand in front of a window and 20 more gems for a school uniform. Get over it, mom

So what does anyone think about MC being autistic/having Aspergers? This is pretty interesting in terms of diversity, but it gets pretty upsetting at times about how demeaning her parents are to her about it, especially with her selective mutism.

I haven’t gotten that far yet so I had no idea till I read your comment that the MC had Aspergers/is autistic. I too think that’s interesting diversity wise, and it’s unfortunate that her parents treat her shitty because of it

… I have run into people where that is the case tho. So it is something that unfortunately happens irl. Ignorant impatient bitches. Smh.

So the reason I had no idea she had these issues is because I’ve been stuck at this moment for over a month: 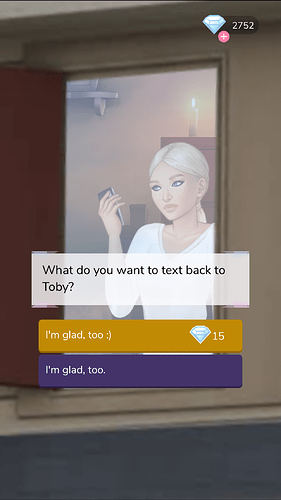 Toby was sweating his smiley so hard that I don’t want to leave him hanging! …but it seems hard to justify 15 gems for an emoticon

lmao. So I just exited and haven’t returned as of yet. Still contemplating this text

15 gems to send a smiley?! Does it change anything?

That’s what I wanna know

Oh yeah, i got stuck on that choice for a while too

Is he all sad if you don’t send the smiley? Lol

Of course, but if I remember correctly MC eventually gives him an emoji later in the story

I actually read this story before it was featured, Story line is surprisingly nice and I love that the MC has a condition. Except I probably won’t read it again because it’s going to cost a boatload of gems.

Anyways, I don’t know much about mental health and conditions, but I want to know about MC having both Aspergers and OCD, despite not really showing much of the latter’s symptoms (unless OCD can be medicated so she has mild symptoms…?) Does it … make sense in lack of a better phrase?

Well, now that I’ve completed this one, I’ll say I think it had one of the better featured LI lately. There were an excessive amount of gem choices, often just for general dialogue responses, and it felt like choices didn’t matter at all. I just kind of watched the story unfold. That and the fact that there was only one LI that you couldn’t really reject made this a risky bet for me, because I’m fairly picky with LIs and like to make choices. Fortunately, however, the LI was a really sweet person, and I found the MC to be a unique lead as well, though I’m not really in a position where I can comment on the accuracy of the representation.

As a person who’s usually critical of featured story adaptations, my feelings about this one were mostly positive, though I do think Episode should take into consideration that a) gem choices should actually make a meaningful impact on the reading experience beyond like texting your neighbor an emoji and b) making every choice a gem choice probably isn’t going to entice people to pay for a story because it just becomes pointlessly expensive to do anything. Personally, I find the stories I’ve spent gems on had a lot of free choices as well, and I was more willing to invest in them because they felt accessible.