Hello there! I recently discovered the show above and kind of just fell in love with it so I thought why not make a thread about it where we can talk about it, discuss our opinions and share memes and that kind of stuff. 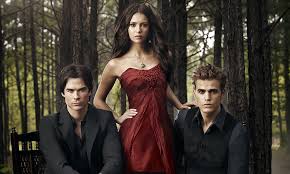 Here you can talk about the following shows (since they are all like kind of part of vampire diaries) :

The Vampire Diaries
The Originals
The Legacies

Please feel free to state your opinion about the show but be sure not to be rude. And for the love of Oreos, do not go off topic.

Also a few questions I would like you to answer if you have watched the series:

And once again Please do not be rude to anyone here!

I watched all episodes, while the last season of The Originals is currently airing in German Free TV each Thursday. Never heard of The Legacies before, though.

And I think The Legacies was released after that or something which is why you might not have heard of it.

In India I think the last season of vampire diaries was airing (last time I checked) I am not sure about now though. I watched the whole series on my phone on Amazon prime.

Hellooo! I’ve watched all three of them, I love vampire diaries I was obsessed back then and used to watch every season again and again!

Who’s your fav character? Mine is Damon lol.

I love Katherine. Elena is just sometimes so… I don’t even know how to explain how she gets sometimes but yeah. Caroline is cute, funny and good I guess.

Elena wants both Damon and Stefan and it gets on my nerves! And sometimes she acts like a brat soooo…

I know! Like girl just make a choice lol. It’s not really that hard. Anything would be better than stringing both of them along.

I’ve watched TVD and TO and I love them both so much!!

Who is your favourite character and why?
I don’t just have one favourite! My favourites are Jenna, Caroline, Damon, Elijah, Klaus, Kol, Rebekah, and Enzo

Which character do you dislike the most?
Honestly, Stefan drives me mad sometimes… Also Vicky, Tyler, and John

One thing you liked the most about vampire diaries?
How TVD didn’t ever really take too long to get one storyline developed and it moved at a good speed

One thing you dont like or believe that could have been improved?
The consistency of what the vamps could do bothered me sometimes! But then again season 1 was based more off the books than the rest of the seasons

Which character of vampire diaries do you feel most relatable to?
Probably Bonnie, Elijah, or Rebekah

Who is your favourite character and why?
I don’t just have one favourite! My favourites are Jenna, Caroline, Damon, Elijah, Klaus, Kol, Rebekah, and Enzo

Like ditto. Those are all my favourites. Especially Damon lol.

He drives me mad more than sometimes lol.

But anyways lol, has no one else watched it like ever? I thought there would be more people who’d have watched it here.

I have half the mind to kill you. But then there’s this small part of me which thinks you might make for delicious pasta.

I only make for sleeping pills.

And you know Choco’s rulez.

I have watched all of these, wow.

My favorite character in tvd is probably Bonnie or Caroline because they are just amazing, and I didn’t really like Elena because she seemed like she thought the whole world revolved around her or something. I liked it when they introduced the originals in season 3-4 (my fav seasons). I hate the later on seasons because the show just felt dragged and forced. I think tvd should have ended when they graduated high school. I don’t relate to any of the characters lol

OOH i like a spicy thread bout my fave show!

My favorite character in tvd is probably Bonnie or Caroline

I know right. I love Caroline the most. Like she is just awesome.

And yeah, I do think Elena thought the whole world revolved around her. True.