Remember when you all were jocking about making a story named « Whoops I’ m pregnant » starring Stella from Thirstymctown as Mc? Well episode made your dreams come true with their next featured ! 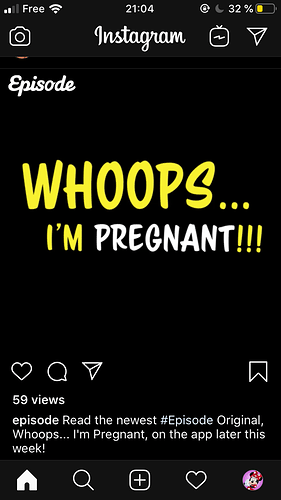 Yes @EliseC they stole your idea

I’m so upset. I have badly directed scenes and multiple Stellas and everything

But seriously, isn’t this story the exact same as Unexpectedly Expecting?

Maybe under the name « Oh no I’m pregnant again »

Thanks for creating this!

Anyways, this story is definitely going to be a kind of parody, or at least heavily comedy-based. For crying out loud, there is a baby donor sci-fi conspiracy element in it. Already getting sick of the vampire references though, but Blood Lust is like a huge thing for them so I kinda get why

I had to pinch myself. I can’t believe they did thissss lmao

Honestly, like with all the other featured story I will only read it for new assets and free gems

It’s episode magic, they can make everything come true, even all your worst nightmare

everything but actually good and originals story that is lol

My actual nightmare. At least I know if I decide to gem mine from this one there’s no risk of them tempting gems out of me because I would never invest in a pregnancy story. Unless there is a gem choice to not be pregnant…

Unless there is a gem choice to not be pregnant…

Unless there is a gem choice to not be pregnant…

Whoops… I’m NOT pregnant. It was a mistake! The end.

Whoops… I’m NOT pregnant. It was a mistake! The end.

that would be an extremely short story

Judging from the trailer, I’m assuming the plot is kinda similar to Jane the Virgin’s premise, where she accidentally gets pregnant from … IDK. I doubt that there would be depictions of Gynaecology or women’s health in general with these types of stories

where she accidentally gets pregnant from

There’s a user story on the app (one of the pregnant by billionaire ones), where this happens. Some other girl steals this billionaire’s sperm to impregnate herself, but they impregnate MC instead. lol

It’s an alien parasite that bursts out of her chest in the finale.

“Which of these two boring dudes do you want as your final choice?” ~alien bursting animation~ “Just kidding! You are now dead. None of this mattered and everything is meaningless.”

Some other girl steals this billionaire’s eggs to impregnate herself, but they impregnate MC instead. lol

Wait, so all of them are women?

I had Positively princess on the brain.