Aye, so… Anyone else have this story pop up for them? 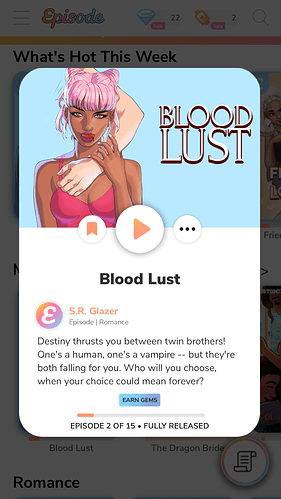 image.png750×1334 331 KB
I gave it a read, expecting the usual Episode BS - and was quite pleasantly surprised! The directing is really good, a little fast paced at times, but quite good. Especially with the use of overlays and background characters that weren’t default.

I won’t forget to mention the new features shown in the story! Pictures under the cut.

My only gripes? The story is a bit cliche, and the romance moved quickly, as usual. And the gem choices, of course. They’re really expensive this time around.

Other than that, I’d really recommend checking it out! Very polished. Better than that Prostecutie thing that came out not too long ago…

4 posts were merged into an existing topic: DISCUSSION: Blood Lust