Does anyone know what command this is?

What does this command do exactly? I don’t understand it. The guide on the writer’s portal only says, “Horizontal Offsets:” and nothing to explain further. Does the character stand offset, leave in a straight line or what?

…honestly I have no idea what is it isnt it like offscreen character?..maybe @amberose knows?

and it just made an error

I think those are character points.

In code and in practise, it looks like this. 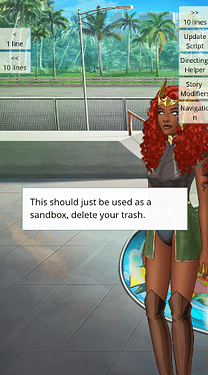 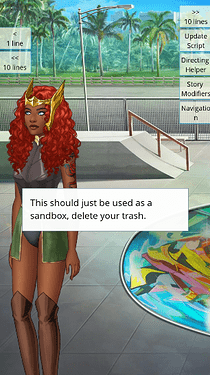 Ignore the weird blurb lmao, I have a trash story where I just run test code.

Same! Lol
In fact, that is really helpful. I was reading the GUIDES under “Extra Tips,” since I like to run and test codes too. It didn’t really explain much so thank you for showing this because if it’s not the only thing it does, it’s a start. It’s a very interesting code to look at. Now I’m curious to what the small “px” is for.

It’s a start! It’s good that you tried it. It showed as an error on my end too. I think the “Xpx” needs to be filled in like numbers or something?

I bet it is short cut for pixels.

I wish it was then it would be easier. I found this code looking at GUIDES and I found it by going through these buttons: “Extra Tips” > “Directing Commands” > Category “Character Positions.” I scrolled down to read the list to see if there were codes I had never seen and bam. Here is one. It’s a character position like some weird spy code. lol

@Scarlet_Sapphire and @Farah_DeSantis, you too may be right! Thank you!
You two have lit up a light! It’s an easier way to set a character onset/offset before the scene begins. It only moves them horizontally (X,Y) from point (0,0) to (10,0). I’m not sure how far a character to be moved from point 0,0 but that’s kind of cool!

Thank you everyone! Now there is a new code to use. Even though, I’ve marked one person’s comment as the solution, all of us are the solution and figured it out together.

Also, it definitely does not work with spot commands.