Hey everyone! Now that the Double Life contest has been announced, it’s time to see all the great entries! You can add your published or unpublished stories!

Here’s mine:
Title: DL: Collateral Damage
Description: When nerdy Ali moves to a new city, she starts an LDR with her cheating high school boyfriend. Meanwhile, she’s mistaken for a powerful politician who has to keep things platonic with a hot babysitter. Can she juggle her normal life with temptations from her second one?
Genre: Drama/Comedy
Includes: Mini-Games, 2 LIs, Choices Matter, Points System, Full CC, (Possibly) Points System, (Possibly) Art Scenes
Chapters Released (If any): None
Covers: None yet

I MIGHT BE DOING THIS!!
Title: DL:Where Secrets lie
Description: You always thought you had a normal family, that is until you went downstairs to get a glass of water… You interrupted your dads late night meeting…What was he doing?
Cover: None
Chapters:Not published yet
Genre:Drama(?)

Bookmarking this for later…

not me attempting to enter yet another contest

If nobody ends up co-writing with me,

Thanks for making this! Here’s mine:
Title: DL: Voltage
Author: Iris Levont
Description: Blairs life takes a turn when she gets superpowers and survives in the process. Her mission? Keep her double life a secret. Will she be able to conceal her secret identity?
Genre: Fantasy/Comedy/Action
Chapters Released: None yet…
Small Cover: 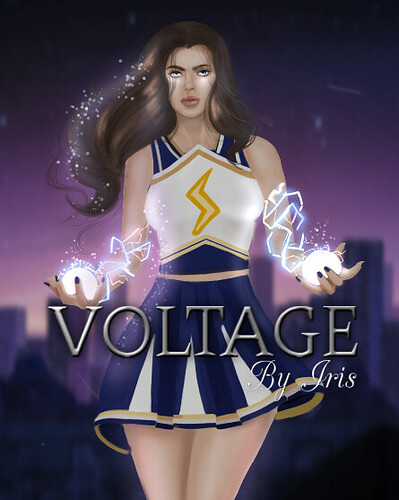 (Lmk if anyone wants a tag!)

Let’s hope this goes how I plan for it to
Name: DL: Forgotten Goddess (not 100% on that yet)
Desc: Idk but it’s about a Zeus’ daughter that Zeus made everyone forget because she’s a screw up but now he’s sending her to Earth to learn and become better
Genre: Who know

Maybe romance or drama? Depends how it goes

I MIGHT try to enter this contest.
Here’s my idea:

(Working Title:) DL: Fairy Heros
(Working Description:) Being the new girl at school is boring, especially when you’re the only one who reads Fairy Tales. But today, you realize that Fairies are real! But to join them, you must keep it a secret. 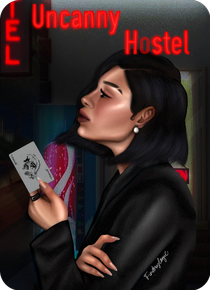 Plot:
You wake up in a mental institution. The doctor comes to see you and tells you that you were institutionalized almost 6 months after you had a psychotic episode wherein you injured six people and put another person in a coma. What caused the psychotic break, who were the six people? Madam Hostel has been a well known small establishment which provides inexpensive food and lodging for a group of people but it is also known for A death of a famous journalist , who tried to uncovers a legend about a supernaturally-cursed, entity who randomly chooses her victims based on their deeds in life. She appears as a regular human in some sort of trouble if anyone chooses to help she let them live if you ignore her or she brings you to her hostel bringing out everyone’s most greedy desires unless they have a change of heart. Congratulations, you been invited to Madam Hostel will you be able to survive when the city declares state of emergency?

I’ll be entering so this is my entry:

Title: DL: Ride to Freedom
Description: Your dream is to be a professional horse rider, except your family won’t allow it. So when you get the chance to compete in a horse competition, you must keep your identity hidden.
Genre: Adventure
Chapters Released: None yet 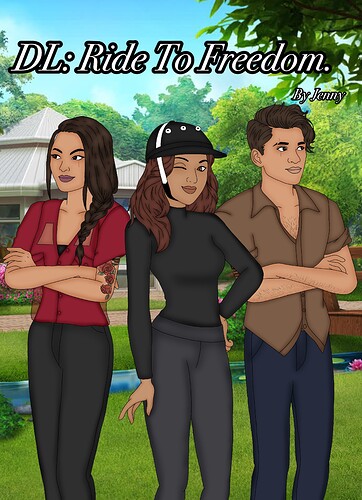 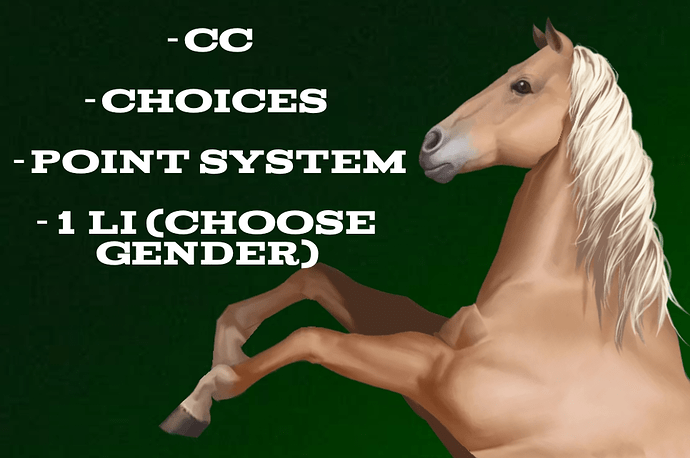 Im gonna enter with my partner in crime haha. But we have no title yet. Or description or cover.

Here’s my idea. I’ve already started coding
Title : DL: Do It For Them
Genre : Undecided (Either Drama or Action)
Description : Rio will stop at nothing to get revenge on those who have wronged her. Even if it means juggling two lives
Status: Unreleased
To go into a bit more depth: Rio’s parents were murdered when she was young and she was forced to live with her abusive aunt. To make things worse, she was horribly bullied by her cousins and everyone at school. Now nineteen, she’s made the decision to dedicate her life to taking revenge on everyone. Her parents’ killers, her aunt, her cousins. Everyone who has ever did something horrible to her. In the day time, she’s regular old Rio. A well loved member in her community and a veterinarian who takes pride in taking care of animals. But by night, she’s a cold hearted, emotionless, ruthless assassin who show know mercy to anyone.
How does this sound?

Made my cover for DL: Sleight of Hand 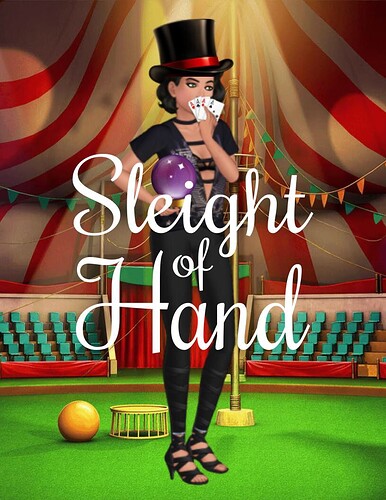