Okay so today I only read one chapter of a story which I’ve been reading as I’ve been doing a lot of edits. I only used one pass. 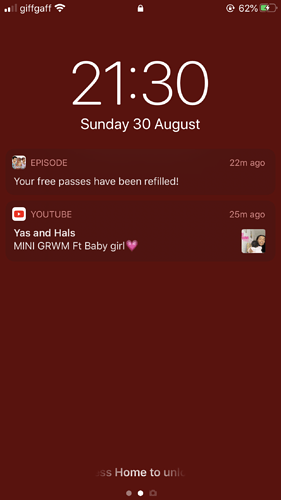 image1242×2208 654 KB
I actually find it really unfair and cheated when episode claims that they have refilled my passes. Last time I checked, passes was plural, so I don’t know why they’re saying this if they only refilled one, to replace the one I had already used.

I think it would be a lot more fair if episode only refilled the passes when readers have used ALL four passes, as I personally always feel cheated if I’ve only used one pass and they send me a notification telling me that they’ve “refilled my passes“

Also, I think the refill time should be from one to two hours as four hours is so long for only four passes, imo.

LMAO that utube video tho

anyway yeeeeeeeeee episode be tricking us and fake giving us passes and shit! it should be 2 hrs not 4 and they should give us more passes

Im about to watch it

Exactly. They need to give us a much more generous amount of passes instead of four passes every four hours. You can’t even read and take a break because after you’ve only used ONE PASS and go for an hour, they magically refill your four passes even though in reality, they refilled one.

They really be scamming us tho.