Episode should give us daily rewards

It’s SO annoying that I have to PAY for gems

like- I want to play the story without having to worry about my choice being dump. If episode could give us everyday a daily reward e.g 5 gems and 5 passes it would be way better.
What do u guys think?

They do give us daily rewards.
We get free passes and free gems. 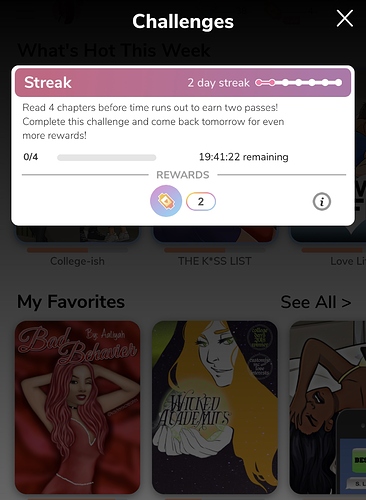 if you read enough chapters

So I must complete these challenges

& sometimes a little orange block will come and give you a timer and you speed the process up and get tickets faster.

This is put in the wrong section. Could someone move it to the correct category ?

I’ve only ever got to Day 2. Guess I should read more huh.

Dude, I totally agree with you. I don’t even buy gems because I don’t need to use them; I don’t read stories with gem choices that much. But, hey it would be nice to get free gems as a reward. I do think episode should definitely consider doing that.

I get three passes on day two but sometimes I get two passes.
Most days i get three.

Maybe, it’s a glitch? lol but I’m not going to complain