I think that having the option to add eyeshadow during customization would be a pretty easy feature for the Episode team to add. It’s basically like adding the eye and hair colour options… but for eyeshadow. All they need to do is add a separate little colour palette below the eye colour palette. [See image below for example!]

The white box with the [X] indicates no eyeshadow for those who prefer that their character maintains a more natural look.

[Ignore the rainbow colour that I added to the palette, that was simply an example… just in case the Episode Team wanted to get a bit more creative with the colour options.] 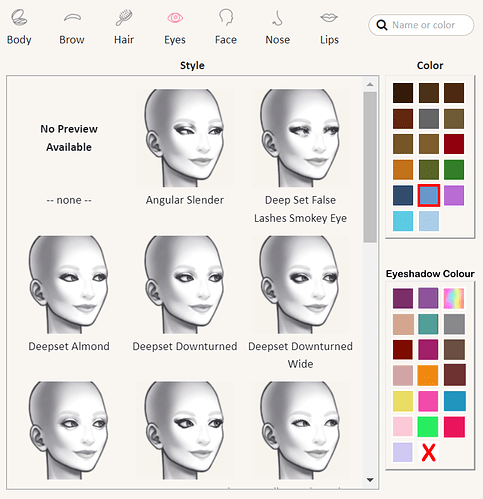 Its not as easy as you think actually they have to make it for each eye shape to fit.

I am bot against the idea would be cool. But I think you underastemste how hard it is

I’m aware of that, but I mean… they managed to do all of those lip colours for all the different lip shapes, so it’ll be no harder than that. And they wouldn’t even need to add many colour options. Definitely not as many options as they did for the lips and hair.

Just my thought. Idk how it would even look like.

Support! This might be a little hard to set up though as they need to make it work for every (or few) eye shape, but they managed to provide us in the portal with hair colors AND the lip tints/shades so I feel like this won’t be too bad. Also, this would be a great idea as there are some plots where the MC/characters wear makeup and/or are beauty gurus <3

Now that you bring it up, I wonder how detailed they’ll make it look

Having edited some eyeshadow onto my characters before, I think that it actually looks very pretty!
But the shades need to be light, not bright like in the example palette above. [But that palette is merely an example. It doesn’t mean use those colours.]

Interesting! I’ve seen some editors add eyeshadow onto their characters. Tried it once and it came out a bit weird looking

Exactly, I’ve read a few stories about “make up artist” characters, and I think they’d like a few more options. Because right now, the only things they change (because this is all they can do) is their hair and lip colour!

And some of those bright lip colours don’t suit the characters at all! [Especially those awful in your face shades of purpleish-pink!]

The bright colours tend to look even worse when the lips are the only bit of make up on the characters. It makes the lips stand out way too much and looks rather clownish, in my opinion… especially when used in combination with the 00 and 01 skin tones.

I can imagine, especially if the colour is rather bold! But the key is, getting it to the right amount of transparency… once you figure that out, it looks so much better.

This definitely would be hard to do, so if this becomes an idea, I’m wishing the Episode Team all the best in doing this if they decide to!