Since Episode seems to be doing more with gem outfits also being added to your profile closet, I would love to see the option for them to also be added to the writers portal if purchased.
The profile and portal seem to be at least somewhat linked, so I think it could possibly be done?

I don’t think I’m alone in saying that I would absolutely spend gems on being able to add some of the absolutely stunning gem exclusive outfits to my writers portal to use them in my own stories.
Episode doesn’t tend to release them in the free weekly updates, and if they do it’s usually a recolor. Being able to get a chance to use them would be amazing.

From what I’ve seen, a sizable chunk of people only read Episode Officials to gem farm, if they read them at all. The Prince’s Bride is the first one I’ve read in at least three years, and I only read it because it added profile outfits.
Having them also go to your writers portal would encourage more people to read the stories and spend gems, so it would definitely be beneficial to Episode as well.

Artists spend a lot of time and effort (which translates to money spent to pay them) only for the item to be worn for five minutes, so why not let us pay some gems to use them whenever we want?
I don’t think the gem exclusive outfits are enough of a draw for people to read the stories for this to be reason to not include this either, especially because community author stories can have gems now too.

For those who are also not aware of what I’m talking about, I’m referring to this: 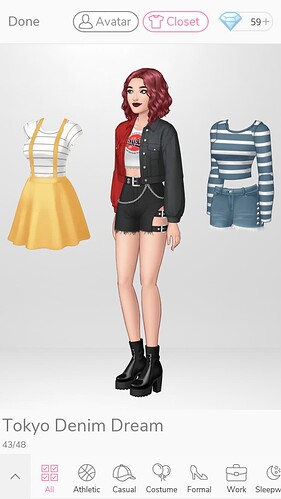 image750×1334 51.8 KB
The Prince’s Bride is I believe the second story to have outfits added to your profile. When paying gems for the outfit, and option or mention it will also go to your profile closet pops up.

Sincerest apologies if another topic has already been made asking for this! I did search around but couldn’t find anything.

Support!! I love this idea/concept <33

Here’s a similar thread that I’m not sure if you’ve seen?

FEATURE: Buying Gem outfits for money to use them in stories Art + Animations

I wish we were able to buy GEM outfits to use them in our own stories. Not many will support my idea, but I hope Episode team hears me.

I want to see in Portal: OUTFITS FOR SALE

I want a store in portal

Where we could buy gem outfits with real money and later we can use them in our stories. Available paying option must be PayPal

believe the second story to have outfits added to your profile.

What’s is the name of another story?

Love on Fire, but I’m pretty sure the feature was only available to some people, not everyone.

Ahhh I hadn’t seen that, thank you!

They’re definitely similar, but I think ?? different enough for this to hopefully be okay? I would love both to happen though, and thank you for the support!

What’s is the name of another story?

Love on Fire , but I’m pretty sure the feature was only available to some people, not everyone.

Yep, it was Love on Fire! From what I’ve read it was definitely only available to some people for a limited time. It’s why I rushed to get through The Prince’s Bride in case I missed it again.

Do you have more examples of the outfits. I want to choose right before purchasing

Support! This would be really cool!

It has been a while since i read a episode official story. I read The Prince’s Bride just because i saw a thread here about getting stunning outfits for episode profile and wanted to see if i can also get for my profile character too.

We can buy them in 2nd or 3rd episode of The Prince’s Bride for 49 gems. But i didn’t buy them. But after reading some more episodes there was a choice to get any of the two outfit choices for free for episode profile character. And that’s how i got this outfit.

Hi, is this outfit your showing its from The Prince’s Bride? My friend really want this outfit but were finding out how to get it. Please and Thank You