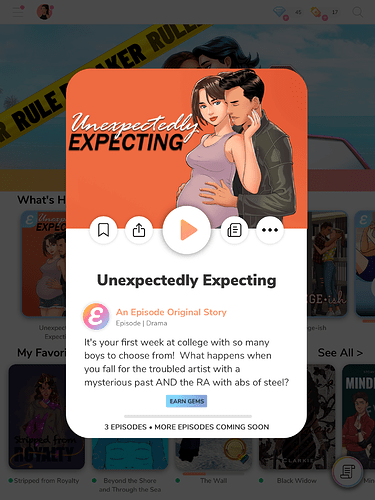 So, I’m not sure if everyone has this or if it’s in beta testing? But it popped up on my device today.
Out of boredom, I read part of the first episode and I couldn’t bring myself to finish even episode one. It’s… not my thing. At all. I found it painful to read.
Also- I’m super annoyed that we got to pick our name but not customise our character. The name picking came a bit later in the episode so I thought CC was coming but nope, so I’m stuck as playing as a blonde, blue-eyed girl. Cheers, Episode.
For obvious reasons, I don’t think you’ll be able to choose your LI’s gender, but maybe I’m wrong and maybe you’ll be able to steal their eggs like in Positively Princess.
Directing is as basic as possible without being spotlight. I found it a little choppy.

Possibly the same people who brought us “In My Bed!!!”

I’m sick of these gem choices.

Every time someone beta tests a new story nowadays, I debate over whether I should even comment on it at all anymore because clearly Episode doesn’t care at all what we think. The past few stories our main complaint has been the default stock characters being used as extras or the MC’s best friend, yeah? But this time the damn MC is almost identical to Stella. What kind of a featured story lets you choose your name but not your look???

Furthermore, 40 gems for an outfit? Who does Episode think they are!

I just— PLEASE EPISODE, STOP WRITING YOUR OWN STORIES! It’s embarrassing. And if you feel you must continue to write shitty fast paced romance stories, just don’t bother beta-ing them any more because you don’t listen. What’s the point in testing these stories with users when U NO LIZEN TO OUR CRIES, EPISODE?

It was awful.
Lazy writing. Lazy directing. Typical recycled events (the MC and her new BFF roommate go to a club. MC gets covered in dirt because of the mean girl. Can’t get in. GEM CHOICE.)
I couldn’t even get through the first episode which is saying something because it’s probably <1000 lines.

What kind of a featured story lets you choose your name but not your look???

I’m hoping this is something they’ll fix. It almost seems like a mistake? Like they maybe forgot to put it in? Since most featured stories do have customisation.

I can’t believe episode featured stories in beta are worse than my hidden story… Like for a company that pays people to create this, I expect featured stories to be the best damn cliche story I’ve ever read in my life.

But this time the damn MC is almost identical to Stella.

I was LITERALLY about to say the exact same thing. It doesn’t even make sense - and whats the point in even choosing a name if you can customise? It doesn’t even seem like they put much effort into that story at all.

And I thought we were actually getting somewhere after the Bloodlust release.

I’m just quoting this in case they would miss it

Seriously though, what is RA?
Real armour? Real abomination? Real asshole?
What is it?!

They are kind of the college student that acts like a dorm mom to the students on their floor.

Ohhh thank you! I’ve never heard of that before

Oh, and we thought it’s the Egyptian Sun God

Whiskypedia: Ra is the ancient Egyptian sun god… Urban Dictionary: Resident Advisor, Resident Assistant - In a university residence hall (dorm ), an RA is a student leader… My guess is the first one (?)

The past few stories our main complaint has been the default stock characters being used as extras or the MC’s best friend, yeah? But this time the damn MC is almost identical to Stella.

Stella has achieved sentience and is infiltrating Episode’s stories. Soon she’ll be everywhere.

Whoops, I’m Pregnant would actually be a great title for a satire

Unfortunately, I’m 99% certain that this story is serious.

Anyone wanna write a parody with me under the original title?

I’m so tempted to say yes