So in my story I’m going to be including at least 2 or more foreign languages at different instances throughout it all. There’s going to be lots of moments where I only have a character say a certain statement in a different language, and fewer times where some purely speak that language.

I wanted to know what could be the best ways to go about including the translation so as to make reading less of a hassle and more simple. I know there are the small reader messages available that pop up at the top of the screen (which I’ve been using so far), but I’ve felt like they just haven’t been cutting it recently.

Also, I know there are authors who simply just include the translation with parentheses in the same dialogue box as the original language, but I feel like that’s just too much reading in one go as well

Does anyone have any better suggestions or ideas on how to go about this? :x

I did it as you said… 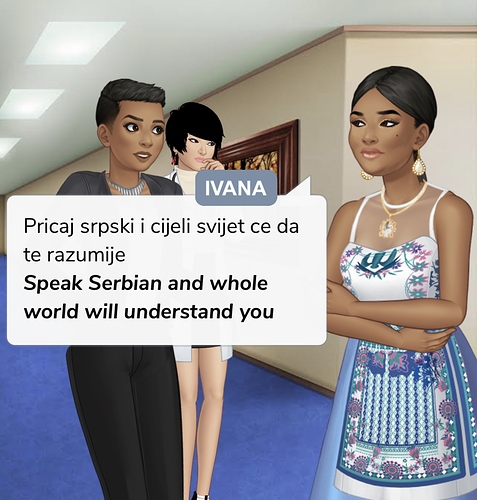 Oh wow, that actually looks way better than the normal parentheses translations I see in stories!

I still feel a bit iffy about how much dialogue there is in the box, but I feel like if it’s formatted this way it makes the text just that much more bearable to read, haha. I’ll try it out first to see if I like it better than the reader messages I’m using now

Thanks for the suggestion!

For mine I did the readeMessage and I put it before my dialogue so both readerMessage and speech bubble showed up the same time. I know you say you used it but I think it looks smoother, as long as you aren’t saying too much and if you are you can still break down. I like the other idea, my only thing with that is that it makes the speech bubble big and you have to fuss about size and position. I’m just fussy about that!

Yeah, that seems like a cool way to translate as opposed to a readerMessage

Yeah I try using them for sentences that aren’t too long, so it definitely helps with that. And I agree, I don’t like when there’s too much dialogue stuffed into one box

Another idea is you can create a translater character??

Oh! I actually haven’t thought of that, and, while it might not help for small sentences that much, it definitely sounds like a good solution for the scenes where certain characters talk in another language that other characters can’t understand. So, thanks for that!

put a text overlay somewhere on the screen, maybe…?

Hmm, I’ve never thought of that! That sounds like it’d be a nice alternative, but I’m not sure if I’d be able to deal with having to wait for all the overlays to get approved

Maybe I’ll do that once the first few episodes are all done so I can just wait for them to get approved while I’m writing new episodes. It definitely sounds like an interesting idea, thanks!

You don’t need to wait for them to get approved… there’s a way to turn overlays into text:
https://forums.episodeinteractive.com/t/a-guide-to-creating-text-from-overlays 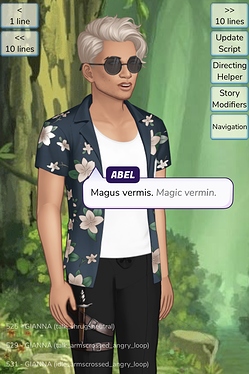 I’m shook, I didn’t know you could do that! HMMM

I’m gonna check out what exactly you can do with this, because I’m really liking the sound of this right now, haha. Thank so much for the guide!

Oooh, you put it in a different color and everything, I like how those look. And same, after a while of putting in readerMessages and having to look up I realized it wasn’t the most pleasant thing to do while reading, haha

I’ll probably format them similarly for shorter statements like the one in your picture. Thanks for the suggestion!