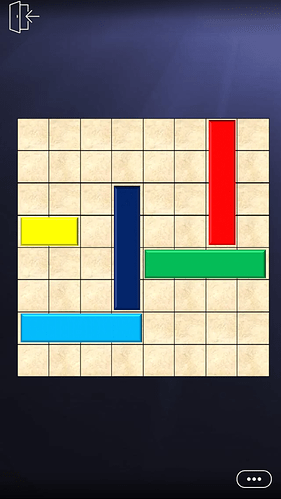 The goal is to get the yellow block to the exit on the right, the other blocks need to be moved in order to make the path, you are unable to move a block if another blocks it’s path.

My question is this

How should the reader control the direction of the blocks?

This obviously would depend on the solution, but rather than tapping the block moving one space, to save your sanity, could tapping the block auto-move it to as far in the other directing as possible? Like if you tap the dark blue one in your example, it moves all the way up because that’s as far as it can go. Then if you tapped the yellow one, it would stop when it hits the red one?

Just think of your mental health while coding this!

Ha ha ha thank you, we just gone on partial lock down in the UK so I need do something to keep me sain

the coding relies on using if, else and the points system and unfortunately I’d need 2 conditions to make the same move but unfortunately don’t think we can do that for example lets say the dark blue block was at the too of the screen. In order for it to go to the bottom it would need the following,

But this also depends on where the blue block is and weather I need it to travel up or down so I would also need to add points to the blue block to give it instructions in which way to travel. So example

But the conditions for the travel direction and the column conditions (if anything is blocking it) would need to go together.

But a massive thank you

So I’ve managed to finish it

The Best Stories Are Worth Sharing: ESCAPE

So… I have an android phone and after that update, I can’t beta any stories

Oh no that sucks