Gem choice: what would you spend your gems in? [POLL]

What would you spend you gems in?

Feel free to add anything below

I would pay gems for the top three choices, but I would only be able to pay once or twice

Also: does this change according to the genre of the story? e.g.: if it’s a romance story, which kind of gem choice would you prefer? Same for other genres.

Omg! I think it was the author nightshifter she had such a good idea, she would have gem choices to read the next unreleased chapter early. I thought that was pretty cool and I’ve honestly spent gems on that.

The best gem choice for any genre is 1) support the author and 2) top-up points.

Those two are the only ones I’ve chosen if i had gems. Most especially STA ones.

I think Mystery, when solving a case, avoid gel choices to help readers get clues. I think it would take the fun out of solving the case.

In Romance and Drama, other characters’ POV and bonus scenes for specific non-canon ships would be nice, but won’t be the top choice if it’s not that big of a ship.

That’s a new featured episode released, the early release and it is now available for everyone. And personally, I think this is something that I could spend my gems in

Agree, gem choices should be worth it and a fun addition not the opposite!

I feel like stories in the drama or romance genre, gem choices will be harder to diverse other than other people’s POV or bonus/extended scenes…

Same, and sometimes the cliffhanger is just too much not to read!

Really? I didn’t know the story was featured! It was in the community’s section

Sorry, I meant a new feature*

I only use gems to support authors I like, other than that not really.

I just created a form to have some statistics: 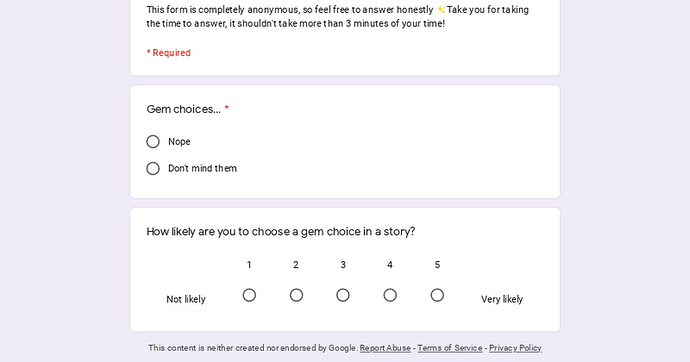 This form is completely anonymous, so feel free to answer honestly ✨Take you for taking the time to answer, it shouldn't take more than 3 minutes of your time!