Gems to be able to CC?

How do you guys feel about this? I’ve read a few stories that have done this… I personally think it takes something away from readers who can’t afford to buy them. I understand why authors add gems, but I just feel as if this isn’t the right way to go. No hate tho to anyone tho. What’s your opinion? 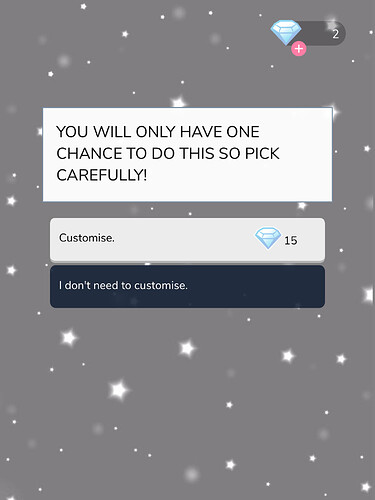 I think gem choices are getting out of hand 15 gems wow that’s a lot people be broke. Reminds me of episode official stories.

I agree with @Jazz5 and @molly247 at that point, if you’re going to do that… you’re just abusing the gem option

Unpopular opinion - I think this is wrong in the first chapter but if it was later on in the story for re customisation (unless episode has released new features) I think it is fair because most authors hate adding it but not for 15 gems. If it was less gems it kinda makes sense. These stories aren’t probably going to be that popular because a lot of people like to make the character look like them.

Imagine if the character had a bent out of shape nose and a hideous hairstyle-
Then I would leave the story and rage!

I personally wouldn’t do this, and honestly I think if I saw this, I most likely wouldn’t continue reading

Moved to Episode Fan Community since Community is for discussion of specific stories. Make sure to check out our Forum Tutorial for more info about creating topics, and feel free to PM me if you’ve got questions.

I agree with @bakedpotato . For first time customization, no, it should be free. But for repeatedly having to add it for the people who click too fast and mess up? Then yeah sure, I can get behind it…but for only 5 or 8 gems.

With the increasing number of stories adding gem choices, it would be nice if authors didn’t put a huge amount, and were more considerate with how they include them. Just my personal opinion.

I totally agree. I understand a lot of people feel the need to include them now, myself included! But I think for most community stories 5-8 is a reasonable compromise.

Exactly! I’m adding a couple gem choices too, literally only bc of the trending update🙄, for the lowest amount whilst still taking the readers experience into consideration. I have a hard enough time getting reads in the first place. The last thing I wanna do is make the experience horrible for the ones that DO choose to read:(

How about a choice where you have to pay 5 gems not to customize? Not that I’m writing a story with bad gem choices or anything…

Totally uncool, especially when CC is so readily available in pretty much every other story for FREE, including Episode Originals.

I haven’t gotten any negative feedback and it’s definitely boosted my rating. I still would obviously rather leave them out but we all have to accept it’s just the way it is and go with it without, like you said, making it unenjoyable as a reader

Maybe do less diamonds as a price? I agree that it does take away from some readers but if you really wanted to do it then I would make the price less.

Woah I never saw stories that did that, but that is really annoying. Like everyone else said, paying for cc in a later chapter for fewer gems is a good idea. But I think authors are doing this because of the trending update Which is horrible btw But still, If I came across that I would DEFINITELY stop reading

Nahhh-- 15 gems to customize? That’s just unreasonable. I get they’re probably trying to boost their rating, but I’m going to assume that most people would click out right away… so they’d probably lose a lot of reads. It’s definitely not a good strategy.

I honestly think it stupid if they put it as choices for dressing , art scenes or cc.

I would leave that story. This is not a thing you should take money for.