Had to put down my pet two days ago

Monday, to be precise. It’s a hedgehog. Adopted him at 6 weeks old, and had him for 3 years since.

I’m torn since he was my first pet.

I actually broke while I said my goodbyes, and couldn’t stop hugging him. My vet was super nice enough to consider sending me an engraving of a clay pendant of his footprint and name, and another as a garden grave stone.

I’ve been writing nonstop this entire day, but it just sort of hit me now that he’s gone. He loved bugging me by walking all over my laptop when I was scripting/writing. He was quite a charmer: the ONE time I’m busy (and spoiling him far more than he already is), that’s when he starts acting like he gives a shit about me

My poor grumpy boy had cancer that eventually became aggressive (the results came in a few days before I chose to euthanize him). We thought he had a skin infection and that was why I went back and forth so the wound could be treated every 3 days…since May.

Do you guys have any pets or had pets?

It hurts so much. 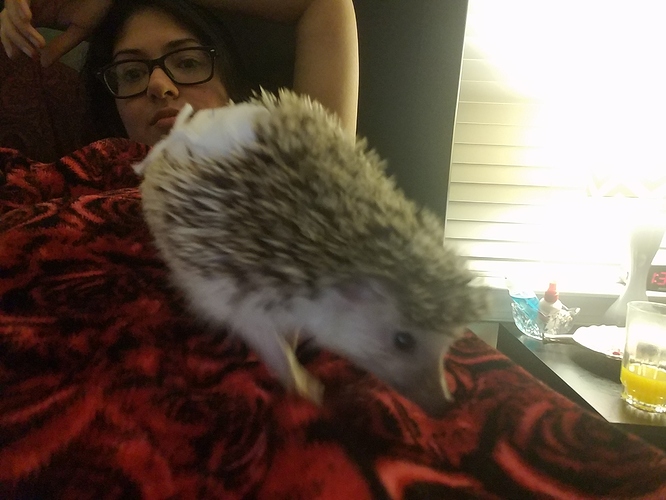 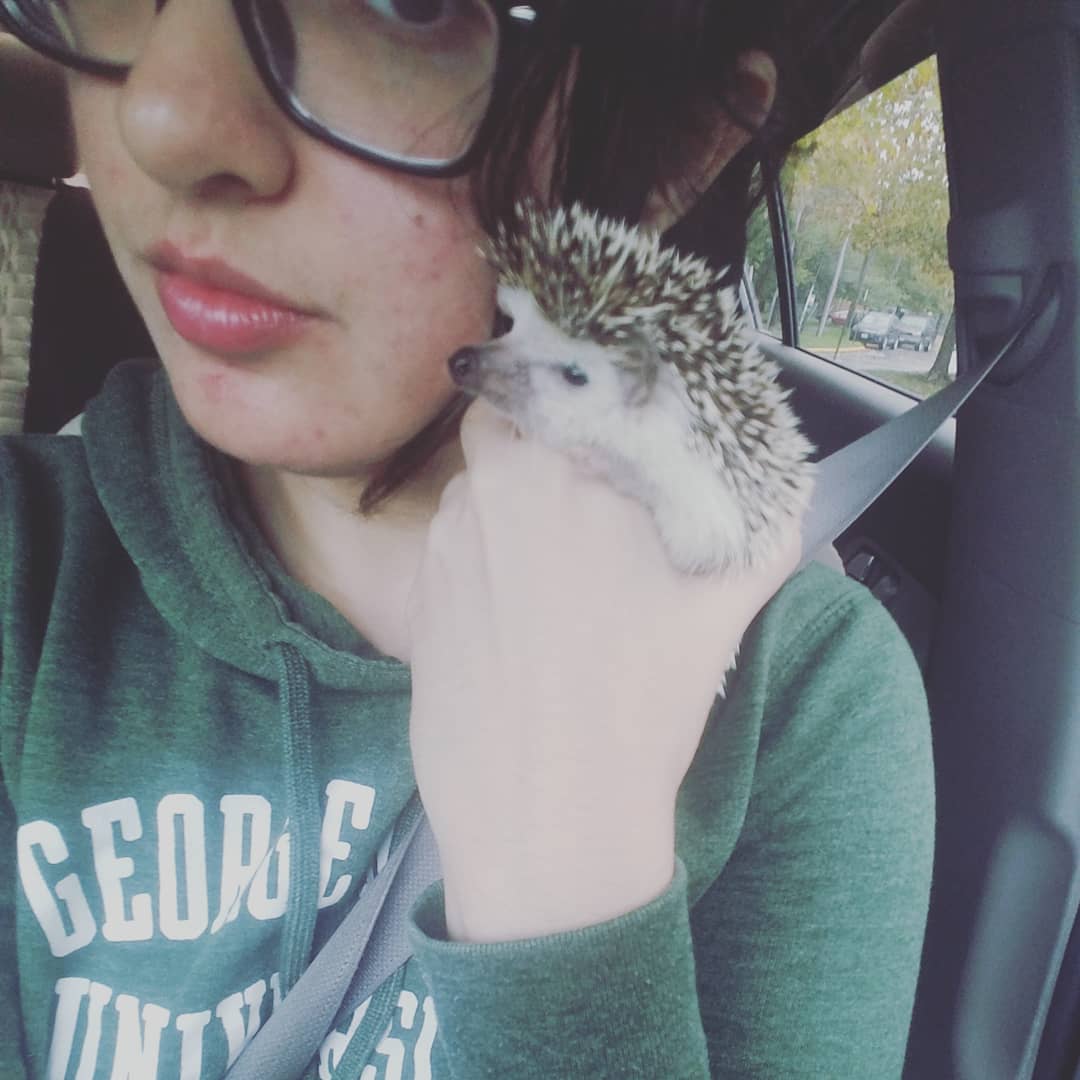 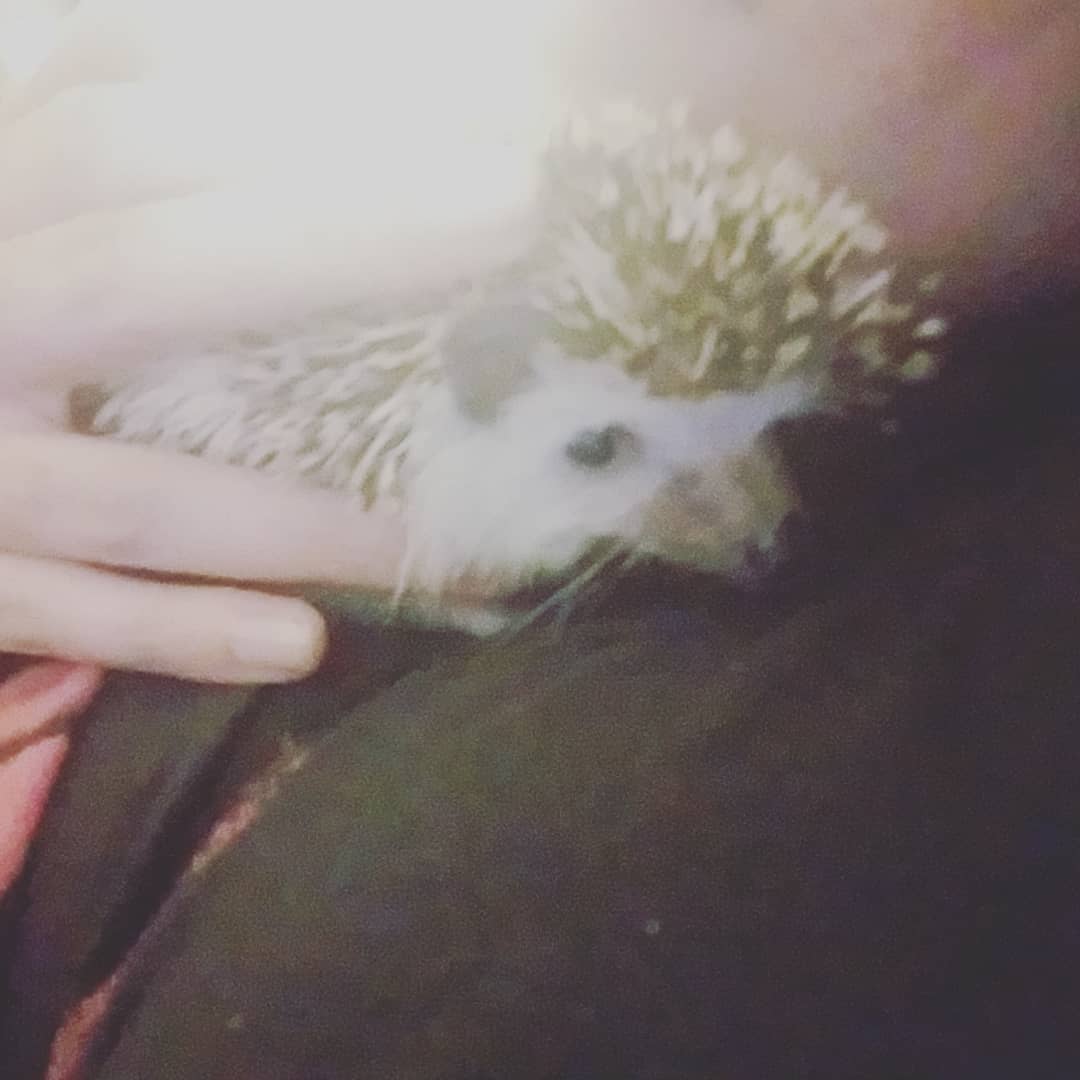 Edited the original post for adding pics. Even with an Insta filter I look like crap before going in

But Christ, I’m just sitting here waiting for BG/OL and realized that I’ll never hear the sound of him huffing at me to go away or him running on the wheel like a champ from now on.

I’m selectively sentimental irl so this is just

I am sorry for your loss.

i’m sorry but i know exactly how you feel. i had a cat that i’ve grew up with ever since i was a child and we were inseparable. but he had to be put down due to cancer. it’s the worst feeling and sucks so bad and i know the last thing you want to hear is “it will get better” but that’s true. i promise it will.
x x

I’m sorry for your loss. I know what it’s like to lose pet. The first time I had pet was my sister’s dog, we had her for 8 years since. Until one night, around new year, she passed away in her sleep which it shocked us. She wasn’t sick or anything. She just died unexpectedly

Then I had another pet was my dad’s dog, we had her almost 10 years since. She has cancer however, we were able to do a surgery and it was success. She live on for another 2 years until she passed away

One of my family’s dogs had a more … stressful death at the start of summer this year. The past 2 years or so she was almost blind and shedded a bit of fur. The day she died, I saw her whining in pain unable to move, but before I found her like that I shouted at her to quiet down before because I didn’t know what she was doing outside the house. She left for surgery after I had to leave for an exam, the surgery I heard was long. She gave out after some kind of organ failure.

I’m fortunate my family still has another dog and a couple of fish as pets, and we kind of moved on after our parting ceremony for her. Still sucks a little, but I hope she’s better now. I would like to extend that for your hedgehog. What was his name?

Part of the family is right. My parents weren’t thrilled about him and always made crude jokes, but they were actually genuinely shocked that the poor guy had cancer and me having to let him go. Hell, they even noticed how skinny he got in a short amount of time beforehand too ):

I guess they grew fond of him, and gave up on getting pisses on me spending a fortune in trying to save him.

Oh God, if I found Fiore (his name) like that I’d break down even more. That’s so horrible, I’m so sorry

When his body began looking weaker because of the tumor, I ALWAYS kept checking his cage in the nighttime/noon to make sure he’s alright. Him being so inactive and limping around, I guess seeing him like that made it a little easier to put him down. Not that it still doesn’t hurt.

Breaks my heart seeing pets departing unexpected. I’m not quite sure how you guys managed to move on, which is impressive, because I’d be inconsolable.

Hell, leaving the vet room without hugging Fiore several times was hard as it is. Seeing my beautiful boy being knocked out from anaesthesia also made it a little easier to finally let him go: he looked so at peace.

I am so sorry. He seems to be such a precious boy. He will be missed.

My dog had to be put down too. He got scratched by a stray cat on the inside of his ear. The wound started rotting and got worse every day. Called the vets did everything we could. He would cry in pain every day. Vet said it was spreading way too fast and the only way to help him was to put him down. How much I cried that day!!!

Yeah, it does break our heart. It took awhile to heal our heart until we move on. I’m sure our dogs are happy and probably watching us up there.

I’m sure Fiore had a good life and you had made him happy. I hope your heart starts to feel better

I had to put down my dog that I had since I was a baby. It’s been five years. I promise you, the pain fades and you’ll start looking back at your pet with happy thoughts. it might take a few months to recover, but try to remember happy memories and talk to someone if you need to

I’m really sorry for your little pet. If it can make you feel better, somehow, I can relate to you. I also have a pet -a cat- who has cancer and will soon need to be taken down. I had a lot of cats since I was born, it’s been a while since the last time I cried over one my cat’s death, since I’m becoming used to see them go too often.
But Poldo, the cat, has been there for me in the past year and he would come to me for cuddles all the time. He is suffering right now, I don’t want that, but I still don’t want to say goodbye…

He’s such a cutie, I’m so sorry for your loss

I lost one of my beloved guinea pigs last year, and in 2016, I lost my dog who’d been with us her whole life (fifteen years). Both were fairly unexpected, which made it all the more devastating. Saying goodbye sucks, but the time spent with them is so worth it… even though it hurts like a bitch in the end.

I hope you feel better soon. May Fiore rest easy

Aw, it was a little same for me before that. Hope Fiore’s at peace now.

I’m so sorry!! I haven’t had animals get put down yet, but my dog has heart problems and was supposed to die about four years ago. I don’t think she’s going to last more than 5 years more…

I had to return my 14-week-old puppy because she became very ill and it was so heartbreaking for me. I’m so sorry for what you are going through and I know what it feels like to not have a companion around the house. I miss her so much and she was always so curious, trying to investigate every little thing (even behind the couch!!) and I took it all for granted until she was gone. Fiore is going to live in a very happy place now, watching over you as your little guardion angel. I know that my first dog (not the one who we returned) will. Because I know my first dog is watching over me, and so is Fiore watching over you.

It’s now almost a week without Fiore. I swear I might be just crazy because each time I lie down or slumped in my bedroom, I hear a wheel rattling. As if he’s running 50 mph on it again

I miss his huffing at me whenever I searched through clothes, dusted my shelves, or type on my laptop.

I have yet to get the footprint claystone and necklace. I guess I’m really working the nerve to go back there again, but of all times my sister isn’t going to university, and I only have classes twice a week (vet is in the same city/town.). I feel like if I walk in the office I’ll just have memories with cuddling with him, or even worse, his last moments, or him high off of anesthesia/drowsy and napping away.

I am somewhat relieved that I went through with it. The fact that he was no longer the grumpy, skittish baby (to the point where he lost massive weight, no longer resisted or curled up as much when I picked him up, and even run on his wheel) made it easier. I try to tell myself now that it was really for the best, and I still have so many memories such as photos on my SC, Insta, Facebook, camera roll, and a small necklace/phone case of hedgies.

3 years went by so fast.

it was for the the best, cause now he’s up there in the sky eating his favorite food and going 100 mph :))

also, it’s been awhile since my dog was put down, and now i have a new puppy. if you ever get a new pet, and you feel like you’re replacing him, don’t think that. you’re just loving another pet just as much as your other one :)) you’re in my prayers