Has anyone ever seen this before?

I was looking through the contest shelf and noticed a white cover that said discontinued, when I went to the account I stumbled on this. 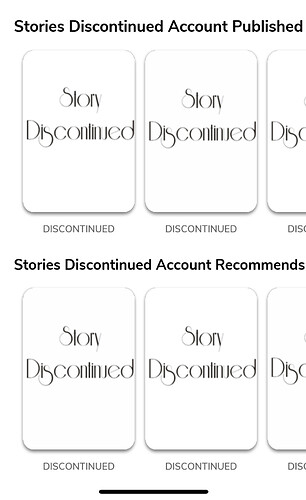 I just thought it was odd and was wondering if the profile holder did it or would it be episodes doing.

Maybe they were banned or just quit ?

I think I know who this author is and, if I remember correctly, I read that they were going to discontinue everything; so this was purposely done.

I had no idea it was possible to do this to an account.

Yeah, it’s just making a cover saying “Story Discontinued” and then setting it as the cover of all your stories.

It wasn’t just covers though, the profile name was discountinued, it says that the stories written have no content (which I never thought was possible since you require a certain amount of lines to publish), I understand you can change the profile name and story names but to remove all content from a story I did not know, this is why episode needs a delete button.

I have never seen that before

Maybe the content was not actually deleted, but some sort of loop was created to prevent the reader from reading the story.

You can do this by using labels and gotos. For example:

It would definitely be better if Episode actually allowed you to delete your profile and all your content. I kind of feel like its a shame she stopped writing, she must have been a decent writer to have over a million reads and win a contest.

It would definitely be better if Episode actually allowed you to delete your profile and all your content.

I completely agree with this.

If my memory does not fail me, back when I first started reading in 2017 or 2018, you could delete your stories. You could even write in the app (I remember I accidentally touched the create button and made a mess, haha). Also, you could replay individual chapters instead of having to replay the whole story.

Don’t know why Episode changed all these features; they were great and made everything easier.

Also, you could replay individual chapters instead of having to replay the whole story.

You still can, if you preview your story in the app.

But yes, I also remember you could create your own stories on the app. Started creating my first story ‘Little Star’ on there. That was a worthless feature (sorry, to say that.) For every chapter you only had 100 lines max.

For every chapter you only had 100 lines max.

It was. So, I had 22 episodes for letting the characters walking back and forwards.

You still can, if you preview your story in the app.

I meant readers, not authors.

For example, if you were reading a story where choices mattered and you made the wrong one, you could replay that episode, pick the right choice and move on like nothing happened. Or if you made a mistake during customization, you also could just replay it instead of starting a new game.

Never seen “Story discontinued” but I have seen This story is no longer available for stories like Mean Girls.